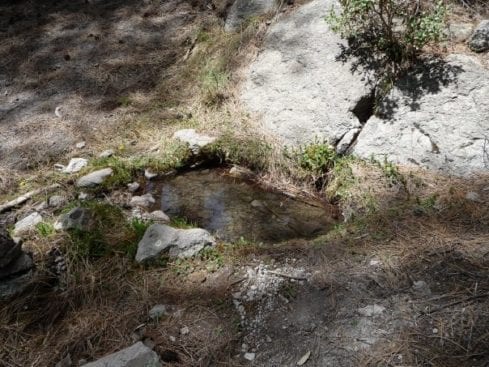 This morning was inspiring. Five miles from route 90, I came across an actual, groomed TRAIL! It was like being on the PCT, with gentle ups and downs through the desert landscape. I could stretch my legs and hike – no slashing by sharp needles, searching in the distance for faint markers, and rolling my ankles across loose, sharp stones that I could not see beneath the brush. The excellent trail was a luxury in this southern section of the CDT.

I could hear traffic as I approached the road and realized it was pretty light. I reached the side of the road, walked down to what looked like a small pullover, and dropped my pack. I took off my sunglasses and worked to appear as pleasant and non-threatening as possible. A few vehicles passed me, and many would slow, smile and wave, but none stopped. That was a little odd, as typically, drivers that did not stop would not make eye contact and speed up as they passed me.

After waiting for about 30 minutes, a small red car pulled over, and an attractive-looking woman with shoulder-length blonde hair and huge white sunglasses hopped out, hurried around her car, and popped the trunk on the little Chevy. She was friendly and gladly offered to take me to Silver City.

The ride into Silver City was enjoyable. I’ve hitchhiked a lot and sometimes found that people willing to pick up strangers on the side of the road are occasionally a little colorful. Francine was no exception. Five minutes into the ride, she announced, “I guess it’s obvious I am Transgender.” I had noticed a difference but had not thought about it. I was unsure how to reply, so I smiled and said, “Oh really?” Honestly, I didn’t care, but I did not want to be rude. My lifestyle (walking for months on end) was not atypical, and I would certainly not judge others. Unfortunately, my response appeared to open a floodgate for her, and I listened for the next 20 minutes as she talked about her challenges, beliefs, and what she wanted out of the lifestyle she had chosen.

I mostly listened and responded politely on the drive into town. I got the sense that she was excited to have someone to talk to, even for the brief few minutes she had my attention. So I did not ask but wondered what it must be like to live in this part of the country, struggling to be accepted, desperate for any acceptance, even from strangers you picked up on the road.

Francine dropped me off at the motel where I had booked a room via my phone the day before. Pulling my pack out of her trunk, I turned to her and smiled. “Thank you for the ride, and good luck with everything.” She beamed back at me with a huge smile. I watched her drive away and hoped she could find what she was seeking and that her journey would not be too hard.

I checked into my room and jumped in the shower before heading out to run chores. Unfortunately, silver City was spread out, so in a fit of laziness; I called a local cab to take me to the PO, which was on the other side of town. From there, I walked to the “Hike and Bike,” where I could get some shorts.

Arriving back at the room, I saw Ron coming out of his room. He was staying in town for a few days and hiking some days. We agreed to meet for dinner, and it was good to catch up. He was going to wait around on Mr. K. and the others before heading out. He preferred to hike with other hikers and found solo hiking boring.

I headed back to my room to pack up and get ready to hike out the following day. I also needed to scope out a place that served an early breakfast. I tried never to leave town without one final meal and, if possible, a Subway sandwich to carry along for lunch and dinner.