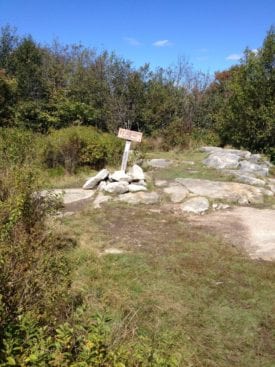 O M G….how could something so small hurt so much!  It was just a small abrasion, but it felt like someone was sticking a hot poker in my foot.  I do hate whiners, and now I had become a MAJOR groaning, sniveling, baby.  My feet had seemed much better, so I had decided to hike back out.  The largest abrasion on the right foot had not scabbed over yet, so I had surrounded it with mole skin to relieve pressure, wrapped it well, and wedged it into my shoe, expecting some discomfort – but holy crap!  I stood up, took a step, and growled as I jerked my foot up, quickly relieving any pressure.  “Freakin son of a bitch,” I muttered as I hopped around trying to keep my balance.

I hobbled out to the car where Ms. M commented on my slow, limping gait.  “It does not seem any better,” she said.  “It really is better,” I said, through an attempt at a smile, that really was just a push of broken syllables through gritted teeth.  “Huh?” she said.  “Good, I’m good,” I said as I moved on towards the car, throwing a handful of Ibuprophen into my mouth as I turned away.   Anxiety, due to sitting still, and fear of over staying my welcome, were pulling me back to the Appalachian Trail.

We reached the trail head and Ms. M hugged me goodbye quickly.  She then headed up the trail with her friends.  This was definitely an active community.   She had met a group of friends here, and as I organized my pack, I watched them practically jog up the mountain.   I gimped up the trail behind them slowly, muttering under my breath as I gingerly tried to place my feet around the many rocks and roots.   As I moved up the mountain, I was already dreading the downhill that would result in a lot more pressure on my feet.

It was an absolutely beautiful day for hiking. The temperatures were in the mid to low 60’s, and the sky had cleared to a robin egg blue.  Best of all was the rolling, rockless terrain that began after the first climb.  I loved these old hardwood forests, and the spruce/pine needles that gave with a slight bounce under my feet.  I wanted to stretch my legs and soar like an…hmm, definitely not an eagle.  I will go with water fowl or duck. They beat and thrash to leave the water, but once they get going they can move.  They are also often in the air for a limited time before crashing back down into the next body of water.

I limped on over Holt’s ledges and Moose Mountain, stopping for lunch on the south peak of Moose Mountain.  At the top of Moose, I looked off to the side of the trail and saw a large, flat slab of granite that appeared perfect for lunch.  I made my way gently through the brush, and began to lay out my gear.  I had brought a sandwich from town, and had alternated between obsessing over that and my feet, so I was stopping early to eat.

I heard voices as I sat enjoying my sandwich, and a few minutes later a large group of kids came around the corner and stopped at the peak sign for Moose Mountain.  They appeared to be college kids, and as I watched, they spread out on the rock in front of me – I mean literally about 8 feet away.   Amazingly, they never seemed to realize I was sitting right there, and I watched them play word puzzles and do some type of chanting.  Over the course of their conversation, I learned they were from Dartmouth, and this was some type of orientation week.  They seemed pretty happy, but most were complaining about foot pain due to the long hike.  I wanted to show them my feet, but they still did not realize I was practically part of the group.

The group leader finally stood and told them it was time to go.  He then lied and proceeded to tell them they were only a few hundred yards away from their destination, and they did not have far to go.   Many of them were not even wearing sneakers, but different types of loafers, and even flip flops in a couple of instances.  The next 3-4 miles would not be a lot of fun for many of them.

I began packing, and a couple of them whirled around to stare at me.  “How long have you been here?” said one of the young men.  “Just a minute,” I said in feigned shock.  I walked past you to sit down.  He looked puzzled and then suspicious.  I’m sure I would grown in mystique as the chattered away, making their way back down the mountain.  Maybe I would help stall some of the impending foot pain for them.

The rest of the afternoon was very slow, and I finally stopped early at a good campsite.  Pulling off my shoes and socks was the best pain I had experienced in a long time – sugar, sweet agony, as I slid the hindrances off my feet, and fell back gasping onto my sleeping bag, waiting for the sharp spikes of pain to slowly subside.  I never wanted to move again.