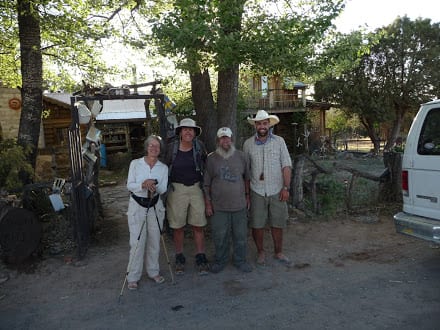 The walk to Pie Town from Mangas Mountain consisted of well-used dirt roads intersected by a few lesser-used Forest Service roads. Pine transitioned to Pinion and Juniper as I dropped to lower elevations and warmer temperatures.

The roads were lined by barbwire, and THIS IS MY PROPERTY! signs. These landowners were defined by the land they owned. I wondered at the names listed on the Keep Out signs – Tuffy, Blaineat… Were these first or last names, and if previous, then what was their country of origin? Maybe Blaineat was French, but I wouldn’t even guess at Tuffy.

Sprawled on the side of one of these lesser used roads, I sat up as an old “whitish” pick-up truck rattled into view. The truck rolled up slowly and stopped. The cowboy deliberately stepped out of his truck and studied me with a questioning look.

“Hi,” I said. “I’m hiking the CDT. The trail runs along these roads, through this section.” His questioning look did not change. “Have you seen other hikers out here?” I said with a slight smile.

“No,” he said as he leaned against his truck. There was an awkward pause as we studied each other. Everything out here was efficient, with very little wasted. He shifted a little as he settled. “My name’s Lester,” he said. “I live up the roadways with my wife.” I nodded and scratched.

My scratching did not stop as words flowed more easily. Lester learned about the Continental Divide Trail, and I learned about the benefits of good cattle cubes. I tried to show off my impressive rashes, but they were buried beneath layers of dirt. It was pretty amazing I did not have an infection, especially with the open blisters littering my ravaged skin. Poison Ivy covered my entire body. I was being consumed I screamed internally!

I was raised in the south, and hospitality is part of the culture, but I’m not sure I would use hospitality to describe some of the people I met out west. Parts of the west are remote and rugged – land created from homesteads. People seem more dependent on each other. They work very hard, and if one does not have something, most likely another will. Their lives are interwoven. They barter and trade, and they provide for and help each other.

About an hour after meeting Lester, I made my way out to the main artery – a wider, harder-packed dirt road. There were now houses and loud rangy cattle dogs behind the rusted barbwire. I had no choice but to make it to Pie Town before stopping. Nothing about these ranches seemed to welcome a lone traveler.

A little while later, I heard a familiar rattling and stepped to the side as a “whitish” truck pulled up slowly beside me. I looked through the passenger window to see Lester. “Here ya go,” he said. “I talked to my wife, and we did not want ya going crazy with the scratching,” he said. In his extended hand was a bottle of Calamine lotion. Tears welled up in my eyes from gratitude and relief.

“Oh my god – can I give you some money?” “No,” he said. “You need it more than I do.” He looked embarrassed as he thrust the bottle toward me. I took the Calamine and checked the gush of gratitude that started to tumble from my mouth. I took a slow sigh and said, “thank you.” Lester had already begun to pull away and nodded once as he glanced my way, a small smile on his face.

Sun beat down on me as I planned my next stop. I did not need water. Would I be able to find a place to camp if I did not make it to town? Was there a grocery store? Would the post office be open so I could pick up my supply box? Cherry pie was my favorite. Could I camp around the Toaster House, and what other hikers would be there? Immediate needs filled my head, as was mostly the case when hiking.

By 7:30 PM, I had reached the outskirts of the small town and checked the simple map that led me to the Toaster House. I arrived at the house just as Nita (owner) and her daughter were leaving. We stopped to chat outside the toaster-laden gate. They had stopped to drop off Nita’s burritos for the hikers.

The Toaster House was Nita’s original home. Hikers, bikers, and equestrians used it. She had left home for travelers after she had moved. It was a donation-based establishment, and I’m sure the donations did not cover the costs. The house depended on its inhabitants to maintain it. When I heard other hikers fuss about anything lacking in the home, I shook my head.

Settling in for the Night

It was nice to see several people I knew when I arrived at the Toaster House, including a Trail Angel I had not expected. Gordon was a Trail Angel I had met on the Appalachian and Pacific Crest Trails. I had met him and his sister several times in Virginia. His sister was a double amputee that had once been an avid hiker. She and her brother Gordon traveled up and down the trail helping hikers with rides, etc. I always knew a cold Gatorade was waiting when I saw their van.

Unfortunately, I believe Gordon’s sister had passed away when I ran into him again on the PCT. It may have been in Oregon, but I think it was also the day I met Nimblewill Nomad. He may have been doing some slack packing with Gordon, but don’t quote me. Age is catching up.

I headed inside and picked my bunk for the night before settling in to eat burritos with Melanie and OOO. We chatted for a while before OOO headed for Lordsburg to run with the moon. His route would be all roads, both dirt and paved. It was the perfect “trail” for a moonlit hike. I wanted to go, but there was no way I was leaving without my PIE, and the diner was not open until the following day. Showering would also be nice, so I wished him well as he walked away. I would run into him again on the trail.