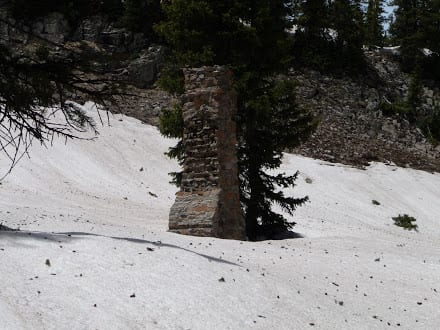 Last night in the San Juan Mountains was frigid, but I only got cold 11 times. Seriously, I’m not sure I slept, even in my Montbell Zero Degree sleeping bag. I’ve always been very warm in this bag, but it may have been a little too big for me to trap the heat like I needed to in the cold temperatures.

I’m 5’11, and all of my bags and quilts are long versions, meaning they fit sleepers up to about 6’5. I purchase them long for a couple of reasons. The first is that I sleep cold and like to burrow, like NO visible body part burrow. The second is that when it is especially cold I will take those things I don’t want to freeze, put them in a bag, and stick the items down in the foot of the sleeping bag – electronics, clothes, shoes, etc. Cold kills batteries, so my phone usually sleeps snug even if it’s not below freezing. I remember when I used to make fun of hikers with phones (sigh).

Last night had to have been in the single digits. I had completely burrowed into my bag, and cinched the hood shut. There was a hole just small enough to breath, and when I stuck my nose out of the tiny hole, the air literally cut it’s way down to my lungs. It was so cold that my bra had frozen and was leaning against the branch beside me. That was going to be fun to put back on.

On a positive note, it was no longer snowing. I suspect that was because the current arctic blast has pushed out any last remnants of warmish air over night. “Warmish” means anything between 20-30 degrees. There was no freaking way I was getting out of my sleeping bag, so I stuck out an arm and dragged frozen clothing into my sleeping bag with me – frozen clothing I had stupidly left out over night. I curled around the icy garments and attempted to thaw them out against my stomach. Small tears leaked from my eyes.

As the sky began to brighten, I began pumping myself up to exit the sleeping bag. This was brutal for a gal from the deep south, but I knew I needed to get out on the snow before it began to soften (if that was even possible today). It is much easier to walk across snow fields when they are hard and icy. I had my snow shoes, but could move much faster in my Kahtoola micro-spikes, especially on frozen, early morning snow.

Crap, crap, crap I hissed as I pulled down the zipper and exploded from the bag. I had managed to dress in my sleeping bag and pack up everything, so all I had to do was pack the sleeping bag, throw all my stuff sacks in my pack, stuff in my tent, lash on my iceax and snowshoes, and I would be ready to hike! By the time I had lashed everything down, and was ready to hike, I could no longer feel my fingers.

I climbed up the hill fast, trying to generate some body heat. My micro-spikes gripped the icy morning snow easily, and I felt like a sticky footed water bug as I scooted across the white expanse. Reaching the large snow wall that had stopped me the night before, I paused to look up, kicked my foot into the wall of snow, and let out a small screech! Trail runners should NOT be used to kick snow steps into ice walls – lesson learned.

I threw off my pack, unfastened my light weight ice ax, and began chopping holes for my feet. It was a slow process, but I slowly made progress up the icy wall chanting my usual mental mantra – “Don’t look down, Don’t look down.” Heights are not my favorite thing in the world, but over time I’ve trained myself to just mentally muscle my way through them. Finally, reaching the top, I lashed my ax back onto my pack, and spiked my way off across the snow.

There was another challenge in the snow – following the trail. This was often a challenge anyway on the CDT, but snow just made it a pain in the ass. My map and compass stayed in my pocket, and by this point I had gotten a gps, but I still did not really trust my gps skills, so mostly just used my map, compass and watched elevations.

Both of these things were still secondary to my primary mode of route finding though, my intuition. I would gaze off across the snow fields, studying the landscape, and ask myself, “If I were a trail, where would I go?” I would then channel the Force, look for the path of least resistant, and head in whatever direction my half frozen, lazy mind determined I should hike. This method is not highly recommended, and worked for me about 50% of the time – but it did still work – and sometimes resulted in unnecessary mileage hiked.

The rest of the day was more of the same, deep snow and ice ax climbing. The frigid temperatures never really eased up, so I was able to mostly walk across the snow in my spikes. There was really only one time I used my snowshoes, and that was in some loose, powdery snow, but that did not last too long.

Mileage was better than I had expected but by about 6:00PM my back was beginning to ache under my pack weight, and my quads and calves were echoing their own complaints. This would put me at about 12 hours for the day, and I had really not stopped much due to the cold. I snacked as I walked, and there was rarely a moment I was not feeding the machine – nuts, trail mix, jerky, Snickers, crackers. I can eat.

I was wearing mid-weight thermals, light Montbell rain pants, and my Marmot wind jacket. This was enough to keep me warm as long as I kept moving, but I got cold if I stopped, and did not want to dig my Western Mountaineering Down jacket out of my pack. I tried to keep the jacket only for camp.

Camp for the night was a small patch of dirt under some Firs. Although I had a Thermarest sleeping pad rated for winter temperatures, I still tried to find warmer ground if possible. Besides being warmer, it was usually flatter and less bumpy. Digging out snow and flattening it was a PIA at the end of the day, and I’ve already hinted at my sometimes lazy tendencies in cold weather.

I always find myself fascinated with where people set up camp. When I read journals, I always enjoy the tent/tarp pictures. Not only did I not take enough pictures on my CDT hike, but I also took almost no pictures of my camps. I’m going to remedy this on my hikes going forward. Camp and people pictures – even when it’s cold. Those are what I regret not taking a lot more of on my hikes.