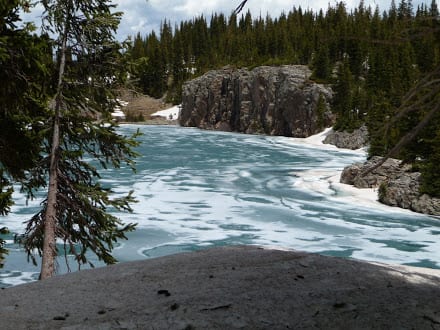 Blue Lake was my destination for lunch, and I found this appropriate as this was my coldest morning yet. Everything today was about cold – ice, snow – even colors like “blue” made me shudder. The San Juan’s were kicking my ass, and the cold was definitely a contributing factor.

The morning started out well, and I was cruising across the hard, icy snow pack. I was going to make good miles I thought as I settled into a rhythm.

Rounding the edge of a stand of trees I came to an abrupt stop and dropped my head as I let out a disgusted groan. Ahead of me was the beginning of a long line of tall snow drifts that cut off through the trees. This was also exactly where the trail tracked, along the side of a steep incline.

There were some old foot steps ahead of me, and I followed them, kicking my feet in hard to keep from sliding downhill. Splatting against a tree was painful, and also a time kill. Making miles always whispered from the back of my mind. This was a long trail with a short season.

Half way through the gauntlet I paused for a short breather. I had taken off my spikes to put on my snow shoes, but had changed my mind due to the angle of the slope. I would just put back on my spikes when I got past this first group of trees. Climbing up and down the 5-7 foot drifts was slow hiking, and although it was still early, my pack weight had me post-holing deeper than I had expected.

Pausing, I slung my pack off my back, and momentum carried it, and my spikes, right on over and out of my grabbing hands. I stood and watched as the pack hit the slick snow and kept sliding. I was sure the trees would stop it, but they just acted as bumpers, sending it careening in different directions. Osprey is TOUGH though, so I was not too worried about the pack, but it was going to really suck to have to walk all the way down the slope to retrieve it.

There was really not much walking down the steep hill, so much as sliding and flailing from tree to tree. I was now fully in the shade and 40 pounds lighter. A steep downhill ice skating rink is probably a better description. I muttered and cursed as I slid and flailed from tree to tree, stopping at each trunk to keep from building up too much momentum. My arms were bruised, battered and scraped by the time I reached the bottom.

I did not rest at the bottom, but threw my pack on and began literally digging my way back to the top. The slope was freakin steep, and I kicked holes while using the same trees to pull me and my 40 pound albatross back up the laughing mountain.

It was 2:30 before I reached Blue Lake. I had hoped to arrive by noon, but the debacle on Laughing Mountain had squashed those hopes. There was really no such thing as an itinerary out here. If you are going to hike these trails and are used to being in control, the trails will set you straight quickly. Let go young grasshopper, and just embrace the brutality. Mother has her own agenda.

The lake was beautiful, like a cold, blue sapphire. A part of me wanted to just traipse across the solid looking jewel, but even I was not that stupid – this time. I studied my map and began to navigate my way around the frozen lake, cursing my way up and over softening drifts. About a hundred yards into the drifts, and breathing hard, I said screw it and just started climbing straight up out of the basin.

Standing at the top, above Blue Lake, I looked down the long steep slope and sighed. This downhill slog would take forever. I stood staring out across the next valley, and then slid off my pack and unstrapped my ice ax. I would just glissade down.

Glissading was SO MUCH FUN, and I screamed with laughter as I picked up speed and flew down the long hill. I don’t consider myself an adrenaline junkie, with zero desire to jump out a plane or summit Everest, but I’ve always loved the exhilaration of speed. The six year old in me shrieked in delight as I shot out across the icy snow pack. “Laugh now you bastard mountains!” I yelled as I jumped up. I spent the next couple of miles searching for and climbing hills just so I could rocket down the other side!

My glissading itch scratched, I stood staring out across the snow fields. In my excitement I had gotten a little turned around. Squinting my eyes I saw what appeared to be a small man made object in the distance, so I headed in that direction. It was a trail sign, with “Trail 813” engraved on the wood. I pulled out my maps, and threw down my pack on the snow. I needed a seat while I figured out exactly where I had misplaced myself.

Intensely studying my map, I was oblivious to the sound of post-holing hooves until Mr. Bullwinkle was right up on me. Suddenly I heard the noise and looked quickly over my left shoulder. We both froze in shock. I’m sure we were the last being the other expected to see. I let out a soft “oh,” as Bullwinkle threw himself hard left and took off like a shot, a shot with no powder. The poor fella was definitely slowed by the deep snow, and I could see the terror on its face as it heaved it’s massive body across the obstacle. It was sad I evoked so much fear in the poor animal. He finally made it to some clear ground though, and I watched as he picked up speed. That sucker could MOVE!

Making my way over to Small Lake was cake! There were actually spots where I walked on dry ground for consecutive feet. This tease soon ended though, and once past Small Lake I lost the trail again.

Loosing the trail at this point was just another placeholder for the day though, and marked a good point at which to call it a wrap. Looking up the mountain I began climbing, until I found a piece of clear, dry ground amidst some Spruce.

I generally did not camp down in valleys, or near water sources, unless I wanted to be cold and wet. The tops of mountains and ridges also left me exposed, so I would usually look to camp about half way up a climb and under or within a group of trees. This kept me warmer and safer.

Settling into my bag, I gulped down a PB&J wrap. I was not long for the world, and slept really well that night.