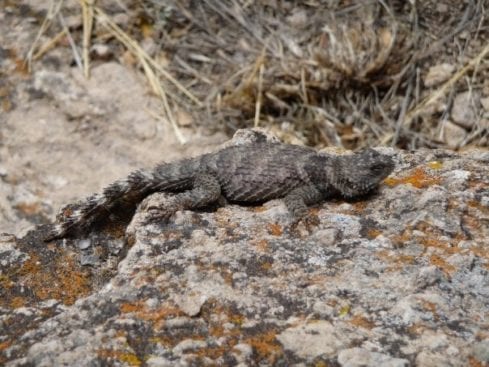 We had arrived in town around lunch time, so I had time to get some chores done. I was one week into the hike, and the CDT had put in me in place with 6 blisters, 2 black toenails, three holes in my shorts, a spider bite, and 4 holes in my new Neoair. The Neoair was my fault. I should have known better than to bring my thin skinned, inflatable pad into a desert with spines and stickers EVERYWHERE. I had already sent a request home for either my Z-rest pad, or tougher Therm-a-rest pad.

My shorts were becoming a bit of an issue, and adding to my whole homeless persona. I had sewn them up while hiking yesterday, using my dental floss to close up two holes. Dental close is tough and great for sewing up most anything. It is right up there with Duct Tape, although Duct Tape is about to fall out of the top spot on my list. When climbing into my tarp for the night, I had ripped the shorts again, so I had put duct tape on each side of the hole, so the tape would not stick to my skin. Unfortunately, while journaling, the adhesive had leached through the other piece of tape, and when taking off my shorts for bed, I had taken off an even larger piece of skin. To say it hurt is an understatement. I’m going to cut up my bandana and sew on a patch as soon as I get another needle. There is nowhere in town to buy shorts.

Later in the afternoon, while soaking my feet, Robbie and Mr. K called me down to their room to meet some other hikers. They were two young twenty somethings that had started a day behind us – nice guys. Their names were Out of Order and Lost – nice guys. They were using Robbie and Mr. K’s rooms to charge their devices before eating, resupplying, and heading back out. Out of Order was also videoing his hike and wanted to interview everyone. Mr. K also recommended he video my feet, but I declined the request. If he made a famous movie some day, I did not want the one shot of me to be my feet.

The guys told us that the “Oblivious” group was right behind us. They had hiked the AT when I was on it in 2005. A nice family – mother, father, son. I think Oblivious (son) was 9 years old then, but I’m not positive. I also remember that they hiked in kilts. Some hikers like the “ventilation” of the kilts. This time it was just Oblivious and his father doing the CDT. I used to run into them often on the AT, but never did get to see them on the CDT.

Everyone headed out for pizza early, but I wanted some meat and veggies, so I headed to the restaurant across the street. I also wanted to get back to the room early. There were three routes out of town, and I wanted to plan my route (avoiding private rancher land) and get up early. I had not told the others yet, but I had decided to head out on my own. I have always been a solo hiker. I like to get up early, and hike until dark, setting my own pace. I’m not much of a camper. I’ve always loved to just hike, so my days are often fairly long. I was going to let the gang know when I met them for breakfast tomorrow.