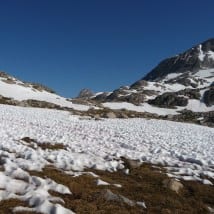 I slowed and tilted my head slightly to the side, catching my breath momentarily as I listened to the low roar ahead of me. Late afternoon was not a good time to cross a snow-fed stream in the Wind River Range.

I did not recall a large stream or river on my maps, but I was on the Continental Divide and sometimes found myself “misplaced” due to a lack of trail signage or markings. I was also attempting a higher route on a piece of trail that was less used.

The trail ahead of me disappeared into dense brush. Pushing through the branches, I looked down to see a dark, turbulent stream with boulders peeking through the foam. I looked at the black, roaring water and could feel the power forced through that narrow creek.

The sun was sinking low, and it was late. I turned to look around and behind me. There was no good spot to set up my tarp. I stepped closer to the water’s edge and leaned forward, looking through the thin screen of bushes on the other side. Under a group of conifer trees was what appeared to be excellent camping – flat with a thick layer of pine needles.

“I can make this,” I murmured as I stared at the rushing water. The stream was about ten yards wide at most. One more obstacle and I was home free for the day. As I watched the water, I unbuckled my pack’s waist and chest straps. The last thing I needed was to fall and be drug down by my pack weight.

The bank dropped off sharply. I sat on the edge and lowered my legs into the rapidly moving snow melt. I gasped and gritted my teeth. The water was frigid! I felt the tingling that preceded numbness begin almost immediately. I needed to get across before my legs began to stiffen, so I planted my hiking poles in front of me, gritted my teeth, and stood slowly, turning to face the current.

I faced upstream at an angle and began to shuffle my feet slowly, leaning forward. I was surprised at the strength of the current. The water attempted to pull my legs from under me, and I could barely hold my hiking poles in place as the stream tried to rip them from my hands.

The bottom of the stream was lined with slick rounded rocks, and I gasped several times as my feet slipped on gravel while I struggled to regain my already precarious balance. I was almost halfway across when the water level began to move further up my thighs, the intensity of the current noticeably increasing. Unfortunately, I had misjudged this crossing. I would return to where I had started and wait for a slower flow in the morning.

I began to turn slowly and found myself stepping down into a hole. The water rose suddenly, and my legs shot straight out from under me. I did not have time to regain my balance. I shot downstream and sunk like a rock under my 40-pound pack!

I briefly panicked, fighting to regain my footing. I should have immediately gotten out of the pack, but in the few seconds it took me to realize this, I tumbled end over end, slamming up against a boulder. The water shoved me hard from behind, and I could not push far enough away from the rock to get the pack off my shoulders. I thrashed and fought wildly for a few seconds before slowing in exhaustion. The cold water was numbing, and I settled against the rock, momentarily resolved to the situation.

Images did not flash before my eyes. I did not think about family and friends, pondering what “should, could, or would have been.”  I only felt a sudden rush of furious anger. I had allowed this situation to occur. I had made a bad decision in an environment that did not tolerate bad decisions or allow for “maybe’s.”  I did not feel fear but saw the fear on the face of the woman looking back at me…and I fought the water again, straining with all of my strength against the current and the rock.

Suddenly, the current seemed to shift slightly, and I rolled to my side. I managed to get one leg under me and then the other. I strained hard and pushed to the surface, where I could grab low-hanging limbs from outstretched branches. I was halfway out of my pack but still had a strap over one shoulder. I pulled hand over hand, dragging the pack along on my arm until I reached the bank and shoved myself face-first onto the mud and leaves. I dragged up the pack and lay there gasping.

As my breathing slowed, I gripped sticks, dirt, and leaves in both hands. Adrenaline drained from my body, and cold and pain began to take its place. Finally, I rolled over and stood slowly. My water-logged pack weighed about 60 pounds, but I heaved it up and headed for the cluster of trees. The sun was dropping, along with the temperature. I needed to get into dry clothes and a sleeping bag before I got too cold.

Fortunately, my compactor bag kept my sleeping bag and clothes dry. I also had my food in zip-lock bags, so it was mostly dry. Wet gear could be a killer out here, especially hiking solo, so I was pretty serious about keeping critical gear packed well.

Settled in for the night, I lay staring at the top of the tarp. I was banged and bruised and would be sore tomorrow, but I still held onto a slight sense of exhilaration. I smiled and laughed softly, knowing I had cheated a very bad conclusion. As I listened to the rushing water nearby, my smile faded, and tears slowly flowed through the creases left behind.