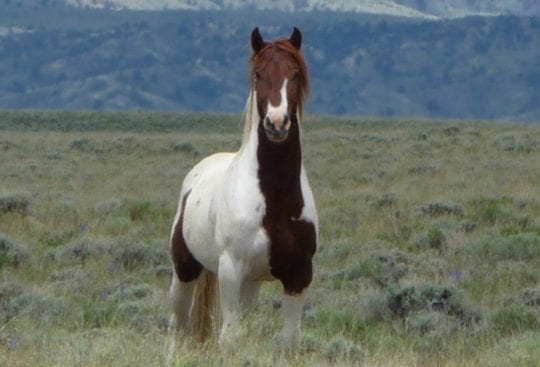 I watched my feet as they wove through rough brush and gravel, bowing my head to the midday sun. Worn two-track disappeared beneath my footsteps as I moved across the Great Divide Basin. Heat beat down from above and rose to meet each step. I glanced up at the excellent line of tree-covered hills on the horizon. Trees meant water and shade, and I had finished my last liter of water about an hour earlier.

Hearing a shrill whinny to my right, I whipped my head around quickly. On a low, mesquite-covered hill were several mares and a foal, watching me warily from about 100 yards away. I had walked for days, hoping to see these ambassadors of the west. I had scanned the horizon constantly for the slightest movement, and in a landscape so remote and desolate, the sudden appearance of this much energy and beauty took my breath away.

I slowly turned towards the mares, and they turned as one and galloped down the low ridge line, whinnying a shrill warning. I thought I heard a distant answer from the other direction but turned to see nothing in the distance. Then, looking back, I saw the mares disappear below the ridge line, and I turned to continue my walk toward the trees in the distance.

Looking out over the basin to my left, I lifted my hand to the sun’s glare and saw a small white object far off in the distance. I watched it as I slowed, realizing it was moving towards me rapidly. Slowly, the white became infused with brown, and the haze surrounding the large animal solidified into its windblown mane and tail. The animal bearing down on me was a large paint stallion. He was responding to the call of the mares.

We both slowed as he drew closer, stopping about 20 feet apart. His muscles trembled as adrenaline coursed through his body, and I held my breath, staring in awed silence. He was magnificent – not the ragged, lean beast I had expected this landscape to produce. Instead, muscles rippled across his shoulders and chest while sunlight glinted in the deep browns of his dusty coat.

This much energy could not stop moving for long, and I was startled as he screamed, half reared, and charged straight toward me. Shock kept me rooted as he got within about six feet of me before veering away, circling, and ending up back where he had started his mad dash. He snorted and pranced, pawing at the hard earth, daring me to move.

My eyes never left his as I started slowly forward. He dashed towards me again before veering away and running alongside the road, galloping ahead about thirty yards. He crossed the road, wheeling back towards me down the other side of the dirt track, throwing his arrogant head high. As he reached me, he tossed his head from side to side, snorting and doing a few small half-bucks. I wasn’t sure if he was challenging or warning me, but I suspected a little of both.

Suddenly, he looked back over his shoulder, lowered his head, and broke into a hard gallop, racing down the road ahead of me. As he pulled away, I heard an engine behind me and turned to see a large red pickup truck. This road had not seen vehicles in weeks or months. The dirt tracks were eroded, and the dry, sage-colored mesquite was beginning to reclaim the road in some spots. I had not seen a vehicle in several days and was surprised to see this new model Ford. Most of the trucks I saw out here were weathered and battered.

I stepped off the road as the truck pulled beside me and slowed. I always felt some mild anxiety when meeting unknown people in the open like this. There were few options but to embrace the situation, so I smiled confidently as a man rolled down his window while fending off two excited dogs with his other arm.

“I’m hiking the Continental Divide Trail. It runs along this old two-track.”

“I’ve not seen any signs,” he said – looking up the road with a slight frown.

I reached into my hip belt and pulled out a map. “This trail is not marked for miles in some areas, but I have maps.”

In New Mexico, the trail had often wandered through BLM (Bureau of Land Management) land, and I wondered if this was the same situation. There had been instances where annoyed landowners had informed me I was on their property while also acknowledging it was BLM land.

“I’m gonna let the dogs out,” he said as he opened the door.” “Don’t worry; they are friendly.”

He leaned against the truck as the two large cattle dogs tumbled out of the truck, sniffed quickly at my feet, and then took off, weaving away through the brush.

“How long have you been out here?” he said, leaning casually against the truck.

He was a large solid man with sandy blonde hair and clear blue eyes. He had deeply tanned skin with weathered creases covered by freckles across his cheeks. The jeans, t-shirt, and lack of a hat indicated he was probably not a rancher, but he spent a lot of time outdoors.

“I started on the Mexico border about three months ago,” I said as I slipped off my pack and rolled my stiff shoulders.

“Oh, no.”  My wife is out of town for a holiday, and I am looking for a good fishing hole I heard about.”  I’m trying to figure out an easy way up into the Green Mountains,” he said, pointing at the hills in the distance.

“Today is the Forth of July,” he said, smiling.

“I lose track of time out here,” I said, smiling.

The man stuck out his hand suddenly and said, “My name is Ben.”

“I”m Ellie,” I said, briefly reaching out to shake his large hand.

He paused a moment and then looked at his watch. “Are you hungry? It is about time for lunch.”

I smiled quickly. “I am always hungry,” I said.

Ben walked to the back of his truck, dropped the tailgate, and dragged a cooler towards him. Over the next hour, we made sandwiches and drank cold beer. I sat up on the tailgate, and Ben leaned against the other end, looking off into the distance as he spoke. I did not say a lot, and he only asked a couple of questions about my hike. He mostly just talked about his children.

Ben had not seen his kids in several years, and I could hear a wisp of sadness in his voice. His daughter was a nurse, and his son had “run off and joined the Rainbows,” he said as he shook his head. He glanced up at me with a knowing look, and I had the distinct impression that he not only did not care for the “Rainbows,” but to some degree, he also lumped me into what he perceived as useless wanderers. Finally, he paused, seemingly waiting for a response from me. I began to make another sandwich as I spoke.

I looked up at Ben, smiling slightly. “I’m probably over-educated, with undergraduate and graduate degrees,”

“I’ve spent the last 15 years earning a lot of money but not achieving and experiencing much I’ll remember, so I decided to make some changes. I realized one day that life was passing me by, and I was rooted in place, watching everything happen around me.”

“I’ve seen things out here that have stopped me dead in my tracks and left me reeling with emotions.   I’ve had tears well up in my eyes from being struck by a sudden, beautiful view and have stood grinning like an idiot as I watched three mule deer bounding in play. In one day, I experienced a range of emotions and a sense of accomplishment that was isolated and scattered over the years at work.

“I know I could pursue a life in other ways, but for me, the journey’s hardships make the rewards and the experiences much greater.”  I heard Ben grunt, but I did not look up.

“Not a day goes by out here that I don’t experience something new and surprising,” I said as I waived my hand in a slow arc – “including the current moment.”

Ben said nothing, and we sat eating in comfortable silence for another ten minutes. As if on cue, we both stood, and Ben began packing everything back into the cooler. He walked around the truck and opened the door to the driver’s seat, calling the dogs and then climbing in behind them. Leaning his arm on the edge of the window frame, Ben turned to me and smiled.

“Be careful out here,” he said.

I smiled back. “Thank you for everything.”

I watched as Ben drove away and then slowly slung my pack onto my back, staggering forward a couple of steps – more from the two beers than the weight of the pack. I had about five more miles to make the following spring, where I hoped to set up camp for the night. I saw storm clouds building over the distant hills and picked up my pace. I expected to set up my tarp before the rain began.