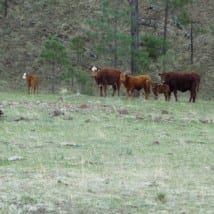 I leaned back against the side of the ravine, squeezing canned cheese onto slices of pepperoni – heaven in a heart-stopping snack. My hiking metabolism burns through the cholesterol before it has time to clog up my arteries. I tell myself this every time I stuff some wonderful, sugary, fatty goodness into my mouth that I would probably never eat at home.

“How do you eat that crap?” Mr. K said, wrinkling up his sun-weathered nose.

I grinned through cheese-coated teeth and smacked my sunburnt lips at him.

“Want some?” I said, holding out the can.

“Sure,” he said as he grinned back at me, holding out his healthy multi-grain cracker in the palm of a dirt-crusted hand.

“What is that?” I heard Katie say.

I looked over to see Katie half-standing and peering over the top of the ravine. I studied her for a moment. Wiry strands of hair poked out under her wide-brimmed, white sun hat. It was pulled low over the top half of her face, obscured by huge, black, square prescription sunglasses. Protruding immediately beneath the sunglasses was a small bit of a nose perched on top of white, zinc-covered lips. She pursed them thoughtfully as she peered out across the dry ground.

I just watched it. How could she even see anything through those glasses? She was probably watching a thin, bony, desert cow. Movement of any type was fascinating here, and small, normally irrelevant moments were often the high point of the day in this dry, dusty landscape. I sighed and stood up slowly on screaming feet with shards of glass embedded into them – slowly.

In the distance, I saw a dust cloud, and I quickly scanned the dust to pick out several points of movement – thin, dirty desert cows. Running along beside the cows was what looked like a ragged coyote, followed by a couple of horses with riders. I stood straighter and turned quickly to grab my pack. Feet were forgotten.

“Water!” I said. “They will know where there is water!”

We had been without water all day, coming across a cow trough only once, filled with green slimy, nasty bovine water. THEY SAID Mr. K and Robbie had filled their water bottles with the stuff “for emergencies,” but I had refused to let the stuff even touch my water bottle. The changes would probably come on slowly, similar to after you get bit by a zombie – ghostly pale, sweaty skin, with bloodshot eyes and low, miserable moans. Zombie transformation was probably very similar to lousy water sickness.

I shoved everything I had into my pack, threw the open pack over my shoulder, and started scrambling up the side of the small ravine. Staggering over the lip of the ditch, I then started shambling, at a slow trot, towards the distant dust cloud. I could hear the others moving behind me as they shouted for me to hurry.

I waved my arms, sure they had not seen me, and watched as the rider at the back of the small herd slowed and turned toward me. The horse paused and then headed towards me at a fast canter. As the horse drew closer, the haze around the rider’s head solidified into wildly blowing hair. My eyes widened, and I came to an abrupt halt as I realized the black stick pointing my way was a rifle. Hopefully, all that bouncing up and down did not jostle her trigger finger.

“Whoa,” I said, taking a step back. “We just want water.” I doubt the scary desert witch heard me.

The horse slid to a stop and turned slightly, gun lowered to the cantle of the saddle but still pointed in my direction. The woman on the horse appeared to be in her mid-80s but was probably closer to her late 50s or early 60s. Desert life was hard on the body. Sun-darkened, weathered skin was covered by fine wrinkles that did not allow for a small patch of relative smoothness. The eyes peering out from under the black cowboy hat were buried deep inside rows of dusty creases and wrinkles created from years of squinting into bright sunlight. I could feel the energy emanating from her.

“What are you doing here?” she asked in a sharp, clear voice. She was clearly in charge and not used to asking but demanding information. I was reminded of my fifth-grade principal and felt the same childish nervousness creep up from my belly.

She shifted the end of the gun away from me as she looked me up and down, frowning slightly. I dropped my pack, and her frown deepened as she appeared to become even more irritated.

“We are hiking the CDT,” I said with a big smile.

“This is my land, and you are trespassing,” she barked at me abruptly.

Fifth-grade principal with a 3x bitchiness factor, I thought. I paused, caught a little off guard. The nervousness quickly dissipated and was replaced by rising anger. My hands trembled slightly as I looked down and messed with my pack. I took my time, taking a breath to collect my thoughts, but not deep enough for her to see my chest heave. I stood up again, only smiling slightly now.

“According to my map, this is BLM land and open to public use,” I said as the smile faded. I had tried hard not to use private land and had not seen a CDT sign for some time. I hoped I was right.

“This land has been in my family for generations,” she said in a lower voice.

She pulled back on the reins as her horse nervously danced in place. I’m sure the horse could feel her anxiety, and my eyes flicked back and forth between her icy glare and the gun only slightly turned away from me. I was encouraged by the fact that Mr. K and the others were behind me.

“We are going to get off your land as quickly as possible,” I said, with all friendliness gone from my voice. I had forgotten to ask for water. Honestly, I remembered, but my pride had overridden my logic, and I was not going to ask this desert witch for anything.

“There is nothing out here but cow holes and troughs. You won’t have any water,” she said as she sneered at me.

“We have filters and chemicals to treat the water. We will be fine.”

“I doubt that!” she said as she wheeled her jumpy broomstick in a tight circle.

As she tore off across the sand, weaving in and out of the brush, Mr. K walked up next to me. He was breathing heavily and dropped his pack before leaning over with his hands on his knees.

“What did she say?” he asked as the others pulled up around us.

“She told us to have a great hike. She also said that you appeared quite handsome and dapper.”

“Really,” he said sarcastically. Did you ask her where we could find water,” he asked through a bit of panting.

“I did not. We will find some,” I said. I heard him sigh in exasperation as I heaved my pack onto my back.

We spent the rest of the day searching for water. Finally, we found a mud hole with cow parts and paddies and a slightly less gross tank than earlier in the day. Everyone traded their prior green water for murky water with green things floating in it – a step up.

Dinner for me was three spoons of peanut butter, squeezed cheese, and pepperoni. The others boiled their sludge and mixed it in pasta or rice. I quipped that it looked like pesto sauce, giving everything a greenish tinge, and not to worry because we would be in Lordsburg tomorrow. The tiny organisms would take at least 24-48 hours to give them the runs; by then, we would be near modern plumbing. The group offered no responses and mostly glared at me over the tops of their little titanium pots. If they ended up sick, I had no doubts that I, not the cow water, would receive the blame.

We had come out of Lordsburg this morning after spending a zero day there yesterday taking care of town chores and errands. This was probably the only reason everyone ignored me. The town aura had not yet worn off, and they knew we were heading into town again tomorrow, so they were patient.

I was not sleepy, but the others were in their shelters reasonably early. I sat up, thinking about the rancher. Now that the situation was passed, I thought about her reaction. Life was hard out here, and you had to work hard for what you gained from this land. I imagined this desert did not give itself up easily. Raising a family for generations would indeed bind you to a place. But, in her opinion, this was her land, regardless of how the government labeled it, and she did not like strangers traipsing across something that had always been in her family. I got that. I probably would have behaved similarly.

I had also heard that some ranchers did not like hikers because they ruined the water sources by swimming and cleaning themselves in them. Honestly, I could not even IMAGINE cleaning myself in one of these tanks. Whatever lived in that water could probably eat away my flesh. I would have been pretty irritated if I had pulled up to see some dirty person splashing around in my water tank. Water was pretty rare out here, so refilling would probably be a pain in the ass.