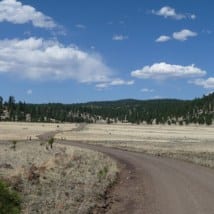 I was ready early, so I watched the sun come up, and took pictures of the sunrise.  I smiled at the grunting and groaning coming from the others, as they packed up.  Mornings were always rough as newly torn down muscles fought the demands to move.  We would all do the “hiker hobble” for about the first 10 minutes, until all parts had loosened up.

I loved dawn and dusk, my favorite times to hike.  I enjoyed coming alive with all the life around me, and ending the day hiking in peace and calm, just before stopping for the night.  This was when the animals were most active, and the sky displayed it’s most brilliant colors.  I was generally not a night hiker because that was the world of the fangs and teeth, and I let them have their darkness.  Unless temperatures were especially brutal, days were my time to hike.

I glanced over to see the others heaving on their packs, nodded at Mr. K, and took off cross-country.   I wove in and out of the biting bushes, pausing only when a small golden coyote crossed my path, barely glancing my way before melting into the brush and sand.

Looking out over the landscape, I could see a line of cattle moving towards a low hill.  They were headed towards water.  I had noticed the cattle moved to find water in the mornings.  The coyote had been coming from that direction.  The wild animals appeared to find their water before full light, at least the smarter ones did.  Life out here revolved around the water sources.  Most of the water we came across had some type of animal carcass in the near vicinity, if not in the water source.  I had recently learned that if an animal had an infection and got sick, it would lay in the water to try and cool down it’s body temperature.  I always checked my water sources carefully.

About an hour later I glanced back to see the group had spread out behind me in a long, ragged line. This usually meant they were getting tired, so I started looking for shade.  We were in a small valley, and as I looked out down the length of the valley I was excited to see a small heard of cows off in the distance.  This probably meant they were gathered near water.  Sure enough, I walked up a few minutes later to find a tank and an old tire – water source gross and grosser.  The water was solid green, but on a positive note, there appeared to be no “extra protein” floating among the algae.  The group arrived, we found a small bush, brushed away the dried up manure, and everyone settled in under a thin patch of shade to eat a snack

I did not sit long.  I got restless sitting in the heat, and preferred to keep moving, so I headed over to take a look at the water sources.

“Are you going to get some water?” said Mr. K, as he walked up beside me.

I glanced over at him, and back down at the tire full of very green water.  There were no more water caches, and the maps indicated a “maybe” next to the windmills.  It was a little cooler today, so should I take my chances, and wait for the next source?  I still had about a liter left.

“Nah – this looks exceptionally disgusting.  I’ll take my chances” I said as I turned away from the tire.  The others had gathered around to peer into the tire, and Katie had stuck the hose from her filter in and begun pumping the sludge into her bottle.  I gagged just watching.  I think I was the only one that got no water.  It was probably not a good move, but my stomach is sensitive enough.  That water might have been a hike ender for me.  I’d roll the dice with dehydration this time.

Hiking over the next couple of miles was tough, in and out of dry, rocky gullies.  Sliding down a small hill, I sat down hard as my feet slid out from under me on the lose rock.  This may have been the cause of my next gear failure.  I suddenly felt a breeze across my left butt check, and stopped to look back and pull my shorts around.  There was a giant hole, and as I stood inspecting it, the others walked up.

“That has been there” said Mr K, watching me inspect the hole.

“Were you planning on letting me know” I said as I began digging through my pack.

“Wasn’t bothering me any” he said.  I looked up to see a slightly mischievous grin on his face.

I finished applying the patch and tugged on it to make sure it would hold.  There was little that duct tape would not hold.  About 25 minutes later, after a particularly strenuous climb, I came around the corner to find two members of the gang stretched out under a bush.  I fussed a little since we had only been hiking a half hour.  They scowled up at me, and feeling a little guilty, I suggested we stop at the next good shade tree for lunch.  They packed, walked 200 hundred yards down hill, and promptly stopped, announcing they had found the perfect tree.  Mr. K was there waiting on us.

We settled under the shade tree, and the “town” discussion started.

“There are no more water caches” said Robbie.

“Do you think there will be windmills?” Robbie continued, spreading out his map. “There are sources” he said with his head bowed over the map, “but they seem a little sketchy.”

I don’t remember who, but it was at this point that someone suggested we hitch to town at the next road – nobody objected.  I too did not object.  Last year on the PCT my blisters had turned to abscesses, and I had not been able to walk for five days.  I’d had to lay in air conditioning, watching TV and eating ice cream for five days.  It was brutal.  I was going to head into town and soak my feet in Epsom salts while I again subjected myself to the same miseries as last year.  I watched as everyone jumped up and took off across the sand, headed for the next road crossing.  I had never seen any of them move that fast, and I had to double step to keep up.  Town was calling.

I walked up to find everyone laying down by the side of the road.  They had already called Ron, who was in town, and talked him into convincing the Super 8 manager to come pick us up, for $80 bucks!  “You have got to be kidding me! It is only 20 minutes away!”  I said.  “He is charging us $20 bucks each.” said Mr. K.  “Seems reasonable to me” he said.  I laid my pack down and sat on it to wait.  There was no sense in arguing.  I was definitely going to move near a trail when I got home, and become a shuttle driver, so I could retire early.

Once back in town, I checked in to my room, took a shower, and then hobbled across the street to get food.  I was starving, having never lost my appetite from last year’s hike.  I ate a lot of food, and then wobbled back to my room to start the healing.  I was only staying over night, so I needed to get as much foot soaking in as possible.