Tanking Up on Water

I tanked up on water before leaving Snow Lake yesterday, carrying about five liters.  That was enough for yesterday’s hiking and last night’s camping.  It appeared water sources on the continental divide trail would be few and far between on this next section.  By the time I arrived at the next source today, I was down to one liter.  I tanked up again at the next rancid, manure infested water hole, and treated the water repeatedly.  I just could not bring myself to drink it though, so I walked thirsty.  It was my emergency water.  “Only if I was dying would I let that vile liquid touch my lips!” I said.   I ended up dumping it out.  It was contaminating my container.

The interesting thing about the water sources was that on my guides and maps they were referred to as “tanks.”  The only thing I could assume was that “tanks” were used to transport the stagnant water to the holes.  What other reason would these muck pools be called “tanks”?  There were no “tanks” present anywhere near these gross water sources.  On rare occasions I had found a tank near a windmill, but not once since I had left the desert.

Yes, I Did Drink the Water

It is with shame that I admit to drinking from one of those cow holes.  Unfortunately, it was the worst one.   I was completely dehydrated when I arrived at the source.  The edges were caked in cow manure, so I waded out into the middle of the chocolate, brown water.  Gagging, I scooped up the filthy liquid, and staggered back to shore.  I could not even imagine what I was stepping on as my feet sank into the soft, warm mud on the bottom of the “pond.”  I filtered and treated the water repeatedly, but it made no difference.  It still looked like a cow had pooped in my water container.  I still gag when I think about drinking it. 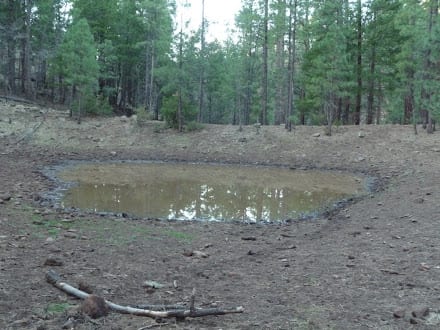 Needless to say, there were cows everywhere.  Some of them also seemed a little crazy, but I was not surprised after seeing their water sources.  Most of them stood on the sides of the roads staring at me as I walked by them.  AFTER I passed the wide eyed statues, they would thunder past me bawling.  I attributed this mass hysteria to delayed reactions to my human presence.  Delayed by fluid brain contaminants.

Late in the afternoon, I passed one cow standing with four small calves.  I did not know a cow could have that many babies.  One of the tiny calves watched me pass and let out a long, loud bawl.  I made hushing cow noises at it so it would calm down.  It’s assumed mother was also watching me, and had large, sharp horns.  I continued on around a curve and was about mowed over by a galloping, bawling, LARGE sharp horned cow.  She was tearing down the road to protect her threatened young.  I dove to the side of the dirt road, realizing THIS was the crying babies mother. 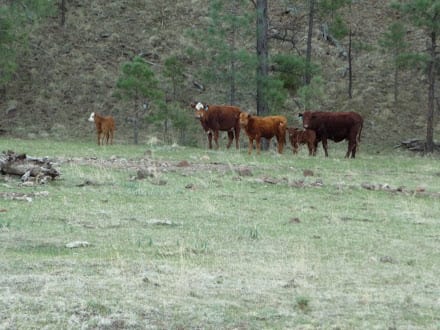 Later in the afternoon I came to an intersection, and pulled out my maps to try and figure out the best route to take.  There had been a note from OOO and Gabe a little earlier, stuck to a post.  The note stated a spring was about a mile off trail, with a very slow flow.  I was lazy, and still had some cow water, so had kept hiking.  There was supposedly a good source coming up, and it was not worth the two mile detour.  I would regret that decision.

Peering down at my maps, I glanced up when I heard a truck engine.  A large SUV slowed down as it approached me, and a man stepped out and asked if I was hiking the CDT.  He said he had seen OOO and Gabe earlier, and had given them some water.  He asked if I wanted a liter.  I smiled, and eagerly nodded my head.  I wanted about three, but did not want to appear too greedy. 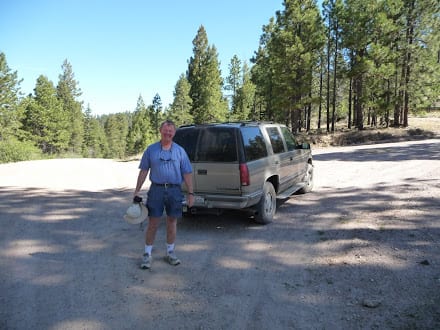 Leapfrog told me his name, as he opened the back of his truck and pulled out the water.  He was out scouting a future section he wanted to hike.  I suggested he cache water if he was going to do this section, since water sources on this part of the Continental Divide Trail were not ideal.  He pulled out his guides and began to ask me questions, but I was not very helpful.

Leapfrog was using Wolf’s guides.  I carried those guides, but they offered guidance going in the opposite direction that I was hiking.    I mostly used Ley, TI, BLM and park maps.  Between all of these, I could usually find my way.

We studied our guides and maps, searching both sides of the road for some sign of a trail.  Leapfrog finally found a CDT placard, and I saw another placard further on through the trees.  I thanked Leapfrog for the water and took off.  There was no trail, but I followed the placards for about 100 yards until they stopped in the middle of the woods.  This was not uncommon.

I looked around for about 10 minutes, and finally pulled out my map and compass.  My current heading was the opposite direction of my desired route.  I took a reading and headed straight up the ridge, flushing a deer in the process.  Following the ridge was the easiest hiking, and about a half hour later I found some small rock cairns.  Eventually, I encountered some faint trail, that faded in and out, and stayed with this “trail” for a couple of hours. 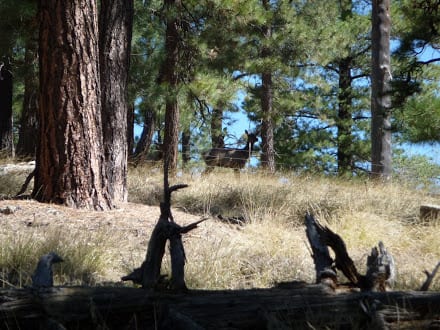 Water under the Iron Lid

My guide indicated the next water source would be located near an old cabin, “under an iron lid.”  Late afternoon, I found the cabin, and searched for an “iron lid” for at least a half hour.  I was hoping it was some type of spring.  Instead I found the most awful of all water sources, yet.  No wonder the cabin was long deserted.  Enough of the cow water for today.  I still had my clean liter from Leapfrog, and moved on through the woods, following a very faint forest road.

Lopez “tank” was my next water source, so I was not hopeful.  The road I was following faded away after a couple of miles.  I continued down an old wash, passing a rusted out truck.  Suddenly, a new road barrier came into view.  I felt a little like I was in the twilight zone.  There was not a road, not even an old service road.  What exactly was it barricading?  These woods were a little eerie.

Lopez “tank” was as expected – disgusting.  At least I had my clean liter from Leapfrog.  I was thirsty, but would wait until I stopped for the night, before I drank the liter.  Waking up thirsty was the worst.  A couple of miles later I stopped for the night.  I had a pretty fierce headache, probably due to rationing water and dehydration.  On top of the water issue, I had also contracted a nice case of poison ivy.   I needed to apply some medicated cream to my new poison ivy rash before it got too dark.  The cream needed time to stop the mind crazed itching before I went to sleep.

It had been a tough day.  I was thirsty, itchy and not quite sure where I was right now.  I laid back and smiled to myself.  This was exactly how I had imagined this trail to be – wild.