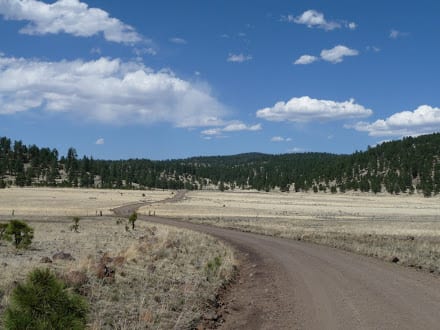 Once again, nature reminded me of my place last night.  My Poison Ivy drove me CRAZY!  I am exceptionally allergic, and my legs are now covered in red, blistered welts.  I always carry Zanfel with me, and had tried to use it last night.  All I had managed to create was a brown, mud paste, which I knew was asking for an infection if I broke the blisters.

The filth from wading in cow manure ponds was not something I wanted to spread around on open wounds, even if it was in a medicinal paste.  I needed to clean up the quickly expanding rash, and had decided last night that I would hitch into Reserve, NM the following day.

I laid in my sleeping bag grinding my teeth, as I tried to sleep through the longest night yet on the trail.  Fighting the urge to constantly scratch, I tried to dream of my next meal in town, but even that could not distract me from the itching.

I slept in spurts until about 2AM, when a pack of coyotes decided to gather in a circle and sing lullaby’s for what seemed like hours.  They finally stopped before first light, just as the gobblers commenced with their war gobbling.  By 5:15AM I was going nuts, so I packed up quickly and headed out to find some semi-clean water.

I traveled cross country for about an hour until I found an old forest service road, and soon realized I had traveled too far down the road.  My maps indicated I should be up on the ridge, so I began climbing, and the forest provided easy hiking.  There was a lot of tall pine and very little undergrowth.

I headed down the ridge until I found some rock cairns and faint, old trail.  I enjoyed this type of hiking. I had to work for it – using all my tools and resources to find markers and landmarks to keep me headed in the right direction.

The only difficult section was an old burn I came to a bit later.  There were no markers or trail, but once I reached the other side of the burn, I walked to the top of the ridge, and  headed straight down hill.  The trail exited the burn somewhere on the ridge, so I walked downhill slowly until I found what looked like a trace of an old trail.  It was not long until I came to an old forest service road.

After the burn section, I was mostly on unused forest service roads, which slowly transitioned to more frequently used dirt roads.  The “trail” was now easy to follow, and I finally reached an actual water tank just before Highway 12.  I had noted the tank on my maps, and had been looking forward to some relatively clean water, hoping to wash off some of my dirt.

Peering over the side of the tank, I wrinkled up my nose at the sight of a dead crow floating on top of the Water.  I would have to wait a little longer to clean up.  The floating crow carcass was a sign, and this solidified my plans to hitch into  Reserve, NM.   I needed to get my poison ivy cleaned up, or I would be searching for steroids by the time I reached Grants.  Grabbing my pack, I threw it over my shoulder, and headed toward Highway 12 to find a ride into town.

About a half hour later, only three cars had passed – none of them even slowing.  Traffic was very light, and I had about decided to hike on to Pie Town.  I picked up my pack and glanced up as I heard an engine approaching.   An old pick-up, towing a trailer, was approaching, and it began to slow down as it drew closer to me.  The old man driving the truck slowly pulled over onto the gravel shoulder, and peered out at me through the lowered passenger window.

“Where ya headed?” he said as he peered out from under his ancient, stained cowboy hat.  I leaned over and glanced around the truck before answering him.  I always checked out the interior of the vehicles, and had turned down many rides because the floorboards were littered with beer cans or liquor bottles.

“I’m headed to Reserve,” I said as I studied the old cowboy with his long silver hair, and heavily weathered face.  He was wearing heavily worn jeans, and a faded, old red, plaid shirt.  He was a human version of the country I was passing through.

“Well, hop in and throw your pack in the back.  I’m headed to Reserve on my way to Huma.  I’ll drop you off.”  “Thank you!” I said.  I hurried around to the back of the truck.

I opened the glass top above the tailgate of the truck, and lifted my pack as the truck began to roll away.  Reacting quickly, I screamed STOP and dropped my pack, barely avoiding getting run over by the trailer behind the truck.  My Osprey pack was not so lucky.

In slow motion, I watched as the trailer slowly rolled over the dusty, red pack, and I could hear the contents crunching as the wheel slowly crushed it.  As the truck slowly crawled to a stop, I walked over and picked up my pack, quickly spinning it around to check for damage.  It was in exactly the same condition as pre-rollover.  I had used this pack on the PCT also.  It was one tough pack, and still in great shape.

I threw the pack over the tailgate, and walked back up to the front of the truck, climbing into the passenger seat.  Don had to have known he rolled forward, but he did not mention the incident as I settled in for the ride to town.  He glanced my way and muttered a soft hello as he pulled onto the highway.  He was clearly a man of few words.

We never broke 50 mph as we drove down the road, and I watched as Don deftly rolled a cigarette while he drove carefully down the middle of the old two lane highway.  Fortunately, there was very little traffic.  He finished rolling the cigarette and reached across the seat to hand me a post card with a western water color painting on it.  He must have taken it out while I was putting my pack away.

“I’m a painter he said.”  I looked at the small painting he had handed me.  It was quite good.  “Is this a copy I asked?”  He shook his head.  “You painted this?” I asked again.  I looked over, and he nodded, with a slight smile on face.  We chatted some more about his painting, and the miles passed quickly.

Don passed away in 2016.  I still have that little painting framed on a table in my office.

Reserve, NM was the perfect hiker town.  The little town was consolidated, and there was very little walking involved.  The motel was reasonably priced, and best of all, there was a great little restaurant across the street (Ella’s).  In addition to these two priorities, there were also 3 convenience stores and an exceptionally nice post mistress at the post office.  As a matter of fact, all the people I met in Reserve were exceptionally nice.   I would definitely have resupplied in Reserve instead of Pie Town if I had known it was such a great town.

When I checked in at the motel, they told me there was another hiker that had been there for a day or two, and gave me his room number.  I chuckled as I grabbed my pack and headed down to knock on the door.  Privacy seemed to be of no concern in the small town motel.  I knocked, and the door slowly opened, with Ron peering around the door with a big grin.  He always seemed to be in towns when I arrived, no matter where he was on the trail.  We made plans for dinner, and I headed off to take care of chores.  I needed to try and stem the poison ivy spread.