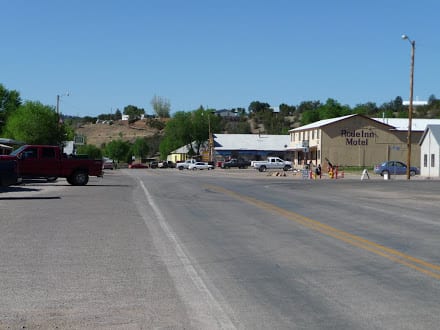 Where I now live, in the northeast, we would have called Ella’s a diner.  I pushed open the door at 7AM and walked into a room full of locals.  Old denim, faded plaid, and well worn hats was the dress code.  A couple of friendly faces glanced my way as I waited to be seated, and I felt the “stranger tension” ease from my shoulders.  In some small town restaurants, I could hear conversation ease when I walked in, and once or twice there had even been a brief hush.  In this small western gathering place though, I was a welcome stranger, and the people eating breakfast did not skip a beat as I entered.

I sat listening to the conversations around me with interest.  Over the next half hour I learned about ranch politics, solar power, Winnebago’s, and what a shame it was that this younger generation did not consider a good horse a priority.  I smiled to myself and nodded.  The quarter horse I’d been given when I was young had taught me responsibility, and forced me to become more confidant in figuring out how to care for animals.   A good horse was right up there with duct tape.

My pack was ready to go when I got back to the motel room, so I filled my water bottles, and headed out to the road.  I walked past the lone bar at the end of town, making sure to inspect each vehicle that was parked outside the already open establishment.  Getting a hitch from one of those trucks (there were no cars) would be something I would want to avoid.  No judgement here, but being picked up at 9:15 in the morning, by someone that had already had a few toddies to kick off the day, was probably not the best ride I could get.

I had just passed the local watering hole when a dark SUV marked “County Sheriff” swung off the road in front of me.  I moaned softly to myself and approached the truck slowly, looking forward to the inevitable lecture on hitch hiking.   I saw the young officer watching me in his side mirror as I approached his door.   “Where ya headed?” he said as I walked up to his window.

“I’m headed up Highway 12, to the Continental Divide Trail,” I told him.  I saw the blank look on his face.  I had become accustomed to this lack of recognition.  The CDT was still relatively unknown, especially in the small towns far from the trail.  I described the trail, and the general concept behind the hike, stopping short of WHY I was hiking it.  This was a little more difficult, and sometimes I was not even sure of the answer.  I wanted to explain with conviction, and since I could not yet, I just stood there smiling awkwardly, waiting for my lecture.

“Well, I  can give you a ride as far as Cherokee Creek,  about 10 miles up,”  he said.  It wasn’t really a question, and I watched as he leaned over to begin moving things off the passenger seat next to him.  The thing about partial hitches is that they often result in full hitches, especially if the partial hitches are a few miles.  A longer partial hitch allows time to build a connection of sorts, and by the time I often reached the drop off point, I heard “Oh, its not that much further, I’ll just take you on up.”  I walked around the truck as he slid the last of the ammunition off the seat, opened the door, and hopped in with my feet propped on top of my pack.

The officer was a genuinely nice guy.  I sensed that he had not been a law enforcement officer for a too long.  I had been picked up by the police before (hitching), and he was not as guarded as others that had given me rides.  He was pretty transparent about his challenges and frustrations in the region, and I could see how much he cared about the people and community he protected. 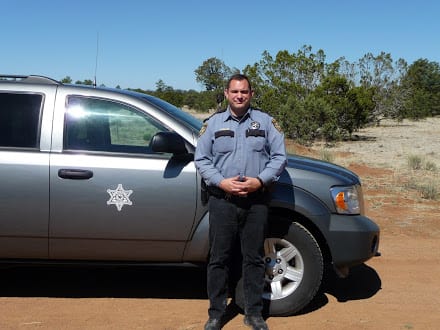 Over the course of the ride, I learned that meth was a big issue, they only had one homicide annually, and Grey wolves were a hot topic.  I was not very knowledgeable when it came to drugs, and had always considered them an urban problem, so I was surprised when he told me that drugs were rampant in this rural area.   He dealt with the users and dealers on a regular basis, and it made his job much more dangerous.

We also discussed grey wolves.  Most of the ranchers I talked to would scowl in disgust when I brought them up, telling me to  BEWARE because they were known to commonly attack people.  The woman at the motel, that had checked me out, said “Those damn wolves have more rights than people do.  I always carry my gun when I travel.”  Backpacking through rural California a year earlier, I had learned the 3S Rule – Shoot, Shovel and Shut-up.  I suspected this was also practiced here in New Mexico.

The officer debunked some of the grey wolf rumors and myths, as we continued to talk.  He said there had never been a reported case of a grey wolf attacking a person, but that they were seeing more instances of them attacking cattle, so ranchers were pretty upset.  “Good,” I thought as I listened.  It was good to be reassured I would probably not be attacked, since I had already been told at least ten times that I would be eaten before leaving New Mexico.

Sure enough, we reached Cherokee Creek, and he said “I’ll just take you the rest of the way.  It is only another 18 miles.”  I smiled to myself and breathed a sigh of relief.  We had passed about 3 other trucks, and they were all headed in the other direction.  I repeatedly thanked him as we drove on up the fairly desolate road.

“You be careful,” the officer said, after I thanked him again for the ride.  “Yeah, you too,”  I said.  He half smiled at my response.  We stood there on the side of the road, as he gazed up the faint dirt road I would be hiking.  There was the beginning of a question in his eyes, and I’m sure the question Why was somewhere in his mind, but he did not ask any questions.  “Take care,” I said again as I turned and walked away. 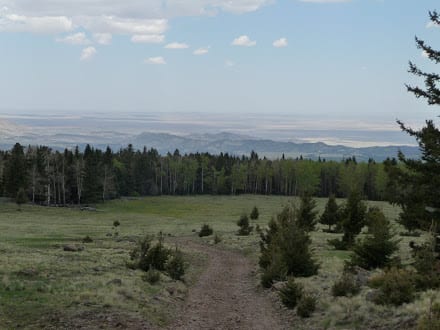 My goal for the day was Mangas Mountain.  There was supposed to be a manned lookout tower, and the Forest Service personnel would supposedly let me climb up to see some amazing views.  There was even a rumor they had sodas and snacks, but these types of rumors were often those of wishful hikers, and were often just that – wishes.

I had about 15 miles to hike, and was getting a late start, so I moved quickly up the rocky, rutted forest service road. The hiking was amazingly easy, and the weather was absolutely beautiful, with a crystal, clear blue sky, and cool breezes.  The hardest part of the walk was making sure I stayed on the correct dirt road.  This sounds simple, but sometimes my mind would wander, and there were a lot of intersections.  The roads became more well used as I drew closer to the tower, but of course I never saw a vehicle.  I always felt like I was hiking in the land where time stood still.  The dirt roads were clearly used regularly, but I NEVER saw vehicles. 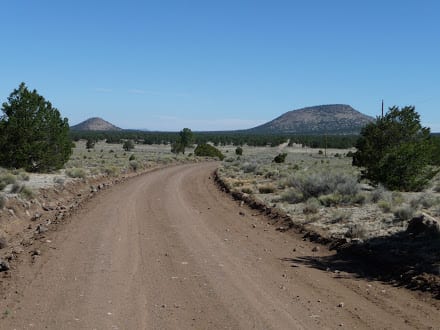 I must have been dream walking again, because I passed the turn off to Mangas Tower, and did not realize it until about a mile later.  Disgusted with myself, I decided to begin looking for a place to camp.  It was already about 7PM and I was tired.  I never slept well on my breaks in towns.  I slept far better out here on my little inflatable mattress, protected by my micro thin mosquito net and thin membrane of cuben fiber.

Suddenly, a large elk bolted from the woods next to the road, and quickly disappeared through the trees on the other side of the road.  The animal motel was open.  I walked back into the woods, from the direction the large gangly beast had run.  Walking among the trees, and studying the ground, I found what I was looking for – a nice flat, slightly indented, elk bed.  The poor animal would loose it’s place of slumber for the evening.  I was not sure why it had bolted, as it’s place of refuge was pretty far off the road, but I would take advantage of it’s craziness tonight.