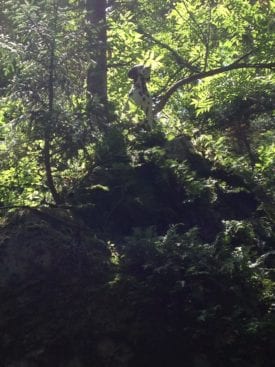 I woke up early this morning, and as I walked past the shelter to head back to the trail, I saw the section hiker from the previous night. He was sitting up in his sleeping bag, making his breakfast. I leaned it to whisper goodbye since the path went right by the shelter, and to my surprise, he began talking to me in a normal tone of voice.

His lips curled up slightly at my look of surprise, and I glanced toward the sleeping hikers. The smirk stretched into a grin as the two sleeping hikers sat up, blinking sleep from their eyes. They were the NOBOs that had wandered into camp the evening prior; unfortunately, our voices appeared to have woken them up. Such are the trials and tribulations of communal living.

The terrain started to get a little more “rooty” and rocky today, and I had to watch my footing more closely.   I also began to climb more as I continued through the dark, rocky forest. Everything was covered in shades of damp green, and moss grew over the rocks and roots that saw a limited amount of light.

I enjoy the ups more than the downs, or my knees enjoy going up more. I think most hikers will probably agree with this.   The impact of me and my pack constantly crunching down onto my knees is always an adjustment in the first few weeks. My older knees aren’t what they used to be.

The crazy thing, though, is that my knees adjust. Just below both knees, a large amount of fluid collects, and the pain goes away. When the fluid first appeared, I assumed it was a result of damage and would try to ice them in town, but over the years and numerous hikes, the fluid reappears at the beginning of each hike. I now consider myself lucky to have a body that overcompensates in harsh conditions. When I quit hiking, the fluid always goes away.

The stream of NOBOs and section hikers continues. Today I met section hikers from KY and TN and had a long chat with them until the mosquitoes rudely interrupted, and none of us could stand still any longer. The last hiker, Mountain City, danced in place, swatting at the bloodsuckers until we both started laughing and announced almost simultaneously that we had to keep moving or be eaten alive.

It was fun meeting Mountain City and another section hiker named something Candy.   They were doing this last section to finish the whole trail, which I found impressive. It takes me three to four weeks to get through the hardships at the beginning of a long hike. I can’t imagine doing that every year for twenty years! About the time you are getting your trail legs, it is time to quit hiking.

My feet were sore today as they carried me over Little Boardman, White Cap, and West Peak. The views from White Cap made me forget the pain, though, as I sat up top, looking down into the valleys below with a multitude of greens and blues. I could see no signs of civilization, and it was easy to imagine I was the only person out here.

I loved the trail of white blazes leading me along what appeared to be a pathway of rocks laid just for the trail, but this was rugged Maine, and I knew this was a coincidence. The maintainers in Maine take you straight up and straight down. Forget about switchback and stone pathways.

The real highlight of White Cap was the dog. I had started my climb up a steep slope when I just happened to glance up to my left. I usually bow my head, find a rhythm, and climb, but something made me look up.

I stopped abruptly, staring at a majestic Dalmation sitting in place and gazing out across the trees. As I studied him, he did not move, and as I looked closer, I saw a streak of what appeared to be rust running down his leg. The dog was beautiful but not real.

Looking more closely, I saw he had been attached to a tree by a metal cable. What the hell, I thought. The metal dog appeared heavy, and I could not imagine someone dragging it up the mountain to attach it to a random tree. I could only think that someone must have really loved their dog to memorialize it this way.

I stopped for an hour at Logan Brook for lunch and chatted with a family out for their annual hike up White Cap Mountain. Three generations of the family did this hike every year, the weekend of their father’s birthday…pretty cool.

Logan Brook’s shelter was simple, and nothing to write home about, but the creek out front had some of the best water I had drunk on the trail so far – cold and crystal clear. “Pure as a mountain spring” fit perfectly, and I scooped some up to mix with my Crystal Light. The water did not need filtering, and although I know I will be fussed at for saying this, I have not filtered water in years.

A few minutes later, a young man I had passed earlier came frantically pounding into camp. He gasped out his need for water, and I pointed back in the direction he had just come from and smiled. When the hiker returned from gathering water, he sat with me while I ate and explained he was doing low mileage on his way to Georgia due to a bad knee. He said he would make up the miles later. He also said he would see me at Carl Newall Shelter, the next shelter, but I never saw him again.

I stayed at the campsites near the shelter and never actually went to the shelter that night, so there is a good chance he did make it there for the evening since I heard voices from that direction.

Once in camp, I ate dinner and decided not to hike further. I had not stopped earlier because the mosquitoes would descend and feed if I paused. My first break was when I crawled quickly into my tent.

I lay on my sleeping pad, spreading cortisone cream on the bites before popping a couple of Ibuprofen and laying back to sleep. I had applied battery acid (DEET) at least three times today, and the mosquitoes had still managed to gnaw their way through the same substance that ate holes in my nylon fabrics. These Maine mosquitoes and black flies we brutal. I had seen a guy in a full-body net earlier and thought him odd. Now I wondered if he did not have the right idea.