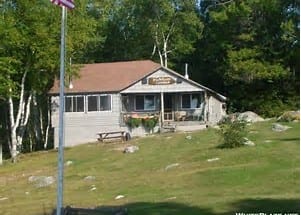 It had rained some overnight, but I stayed snug and dry in my Z-Pack tarp. I had a tall version, and I fit in it perfectly. My gear was tight, but I kept most of it down by my feet. Since the pack pushed against the tarp’s side, I put my rain jacket over the pack to keep off the backsplash that tended to bounce up from the ground and underneath the edges of the tarp. I’m proud to say my ULA Ohm pack is small enough to tuck under my jacket, although I’m not sure if I have bragging rights since I have an x-large Marmot rain jacket.

A quick word about my tarp, other than it is fantastic: I like the Z-Pack cuben fiber tarps for many reasons – they are light and easy to pitch, but mostly they shed water like a duck. I shake them hard, and most water sprays right off, unlike the nylon tents. Also, nylon seems to absorb moisture more than cuben fiber. Cuben fiber also dries much more quickly in the sun, and I always stop at the first splash of sunbeams, both to eat and to dry out gear left wet from overnight rain or condensation.

Straight out of the gate were a couple of good climbs, with the only actual mountain being Nestuntabunt.  That is probably spelled wrong, but since that is how I pronounce it, that is how I will spell it. That and I’m just too lazy to look it up.   There was what I considered an equivalent climb before “N,” but it was neither a bump on my topo map nor mentioned in my guide. I discovered throughout this hike that many of the “bumps” I traversed were often not indicated on my maps.

I continued into the morning, arriving at a rock ledge with a fantastic view of Katahdin and a large lake below. A young guy was further down the ridge in front of me, talking on a cell phone. It was hard to get away from them anymore. I’ve always carried one to my journal but rarely ever make calls. I will admit to checking email to keep those at home engaged and reminded that I am still around and not easily forgotten.

The young man wrapped up his call and then turned towards me as he stood up. He looked startled and smiled as he raised his hand in a tentative hello. He was about my height, wearing tan cargo pants and a dirty, white cotton t-shirt. He was thin as a rail, with shaggy dark brown hair that fell to his shoulders and bangs that hung just past his big, dark eyes. I smiled in return and raised my hand. He seemed shy, and I watched as he leaned over to slide a vast pack toward him. He grabbed one strap and flung himself and the pack backward, heaving the pack upwards as he ducked down and allowed the pack to settle on his back. He stayed bent over for a moment and then stood a little too quickly, staggering a few steps back under the weight of the pack. He looked as if he might fall down the flat slab of rock he was standing on, and I started to rise quickly. Then, still bending over, he lifted his hand in my direction. “I’m good,” he said softly.

I settled back, expecting him to wobble off the trail, but he walked over to a small tree and slowly and carefully bent down to pick up a full-day pack. I had missed the small pack leaning against the tree. As I watched, he slipped the little pack’s straps over his shoulders and reached behind him to pull the waist belt behind his back and buckle it. This took at least five minutes because he had to wedge the day pack’s straps under the 70-pound pack already lying flat against his pack. This was almost as fun as watching hikers try to hang food bags. I just stared. He had at least 70-80 pounds strapped to his body. Finally, he looked up at me and, in a very matter-of-fact tone, stated that the day pack was to keep him from falling back due to the large amount of weight on his back, like a counterweight. Thou shalt not judge or assume. I just smiled and said it sounded like a good idea. Camels have two humps, so why can’t people.

The rest of the day was pretty uneventful, but I met several hikers recommending White House Landing and its one-pound hamburger. I had been to the camp on another hike but had decided not to go this time. I wanted to make more miles and thought I could resist my infamous appetite. As was typical, though, my subconscious latched onto the food image, and I had random hamburger flashes as I continued hiking. I attempted to ignore these images of large juicy burgers, but as I passed the turnoff to White House Landing, my body turned off its own accord, and I headed down the trail.

I followed the blue blaze side trail to a boat dock, where I blew an air horn one time…only once. Bill gets ornery if it is blown repeatedly. Hunger and patience don’t often go hand in hand with hikers. I looked out over the water as the loud, blaring horn echoed across the lake, or pond, as they call these giant lakes in Maine. Across the water, I saw a small white figure walk across the property and into a flat-bottomed boat. The boat raced across choppy little waves, with Bill standing by the motor in the back. We both said hi as he helped me down into the boat, and the little boat raced back across the pond as my mind wandered to how I would construct my burger.

The camp was a series of cabins, a bunk building, and a central hall where food was served. The grounds and facilities were well-kept, and this was a well-organized operation. Unfortunately, everything functioned on propane, and there was no electricity. Bill and Linda are selling the place and heading for Florida. I have a feeling it probably won’t remain a hiker stop. The good news is in current 2017. It appears WHL is still a hiker and snowmobile stop and is no longer being sold.

I took a private room in the cabin down by the lake. There were a couple of other NOBO hikers in different rooms, but at least the snoring would be muffled. I am not a fan of bunk buildings, mostly because I’m an introvert and the world’s LIGHTEST sleeper. I carry earplugs, but no matter how soft the foam, I have never found these comfortable. I’m a side sleeper and inevitably end up with foam shoved halfway down what feels like a bruised ear canal the following day.

I took a hot shower while I waited for dinner. Dinner was the only reason I was here. They had a 16 oz. Cheeseburger that was famous up and down the trail, along with their pizza and blueberry pancakes. Just a quick note here. This journal has two themes – backpacking and food. I hike for two reasons – freedom and food. Where else can you eat AS MUCH AS YOU WANT and lose 50 POUNDS without having an eating disorder or tapeworm? Granted, the food is not always the healthiest, but it can be consumed unimaginable quantities to eat as much and as frequently as possible. What do I call this – put – heaven? I’m kidding – kind of.

I continued to wash and scrub my clothes after dinner. There was an old tub and washboard down by the lake, and I beat and pounded on my clothes, knowing that the cold water would probably make them a little less smelly by morning. Then, not thinking, I hung them on the clothesline next to the cabin and sat down to chat with NOBOs, Walker, and Issac.

I mostly sat and listened to Walker talk about Inchworms. He knew the missing female hiker that had disappeared from Stratton, ME.   It was sad she was still missing, and everyone seemed to have a lot of theories about what had happened. However, I had seen signs asking about her whereabouts at road crossings and would continue to see them after I left WHL.

I completed my typical chores until dusk and then fell into bed around 8:30. It was a very long night, and I awoke every hour to check my watch, not wanting to get up too early and wake up the other hikers. I was ready for breakfast by midnight, but I dozed back off amidst muffled snores and grunts.

Update on Inchworm. Her body was found almost two years later. Based on her journal and text, she had left the trail to go to the bathroom and gotten lost. It appears she lived at least 26 days after leaving the trail. She set up her camp on a small knoll and was found in her tent, in her sleeping bag. Rescuers came within 100 yards of her camp on two occasions, but the woods in this section of Maine are incredibly dense, and the terrain is very rugged. It was a tragic event.