I was hiking by about 6:15 AM and hobbled along for about 15 minutes until my feet were numb. Unfortunately, my trail runners continued to chew up my feet, and I now had two blisters on the sides of each heel and even blisters under my toes.

I had expected my feet to improve as my shoes broke in more, but the opposite was happening. The more the shoes broke down, the more they rubbed my feet in the wrong places. I had finally found a lousy pair of HOKAs, who now made the best and worst shoes I had ever owned!

My goal today was Jacob’s Lake. It was only about 3 miles off the trail and had a restaurant and motel rooms. I wasn’t sure I would head into “town” for the night, but the pull of a restaurant is always strong, so I would see how I felt when I arrived.

Water would be scarce over 26 miles, so I grabbed some gross water at Crane Lake before continuing through the desolate Ponderosas and grasses I loved so much. This remote, austere hiking reminded me somewhat of the hiking in Wyoming through the Great Divide Basin – quiet, simple, and with a feeling of intense remoteness.

I reached Telephone Hill Trailhead after hiking through an old burn area and approached the bear box at the trailhead to see a piece of paper taped to the top of the box. On it was the announcement of trail magic from someone named Cruze Control. I did not get excited since I was usually the last one at the party, and nothing was left.

This time though, I was the first to the party! He must have stocked up the box minutes or hours before I arrived. The box had front doors, and it was chilly, so I opened them up and sat in the box while I downed a coke, fried pie, and a piece of chocolate cake. There was so much food, but there were also a lot of hikers behind me, so I tore myself away after about a half hour and kept walking.

Fifteen minutes later, I was jetting along on pure sugar and caffeine. With my jacked-up metabolism, that trail magic was like jet fuel! It was just enough to propel me forward but not so much that I needed a nap after a sugar crash – perfect.

The rest of the day and afternoon went by fast. I stopped for a late lunch, propped up on a stump, spread out my Thinlight Pad, and passed out for about an hour. I think the sugar crash had caught up with me.

I arrived at Highway 89A just before dusk to find another young hiker debating going into Jacob Lake. I still had food and water in the bear box, so I chatted with him for a few minutes and then moved on to find camping before dark. I wanted to get a mile or two away from the road and trailhead – all part of my own “solo rules” I try to adhere to whenever possible.

I would have gone into Jacob Lake for dinner, but it would have been dark when I tried to hitch back out to the trailhead, and I did not want to stay overnight. Also, the longer I’m on the trail, the less time I want to spend in towns.

Don’t get me wrong, the desire to eat town food becomes even stronger, and I’ll go to pretty good lengths to get to hot food, but I think maybe I settle into my introverted self more and more as I remain in the backcountry. The desire to be surrounded by noise and people lessens, and I often find myself just waving at other groups of hikers as I pass. Maybe I just become a little more feral over time.

Finding a place to set up camp was not as easy as I had hoped. There were a lot of dirt roads, and I even passed a couple of campers that had pulled back into the woods for the night.

Finally, I hooked a right and climbed a hill until I came to a secluded group of Ponderosas and settled into bivy for the night. It only took me a few minutes to throw everything down on the ground, and I sat eating a PB&J wrap while I watched the sunset through the trees.

Hearing a small branch break, I looked over my shoulder to see two Elk watching me from the edge of the trees. It was amazing how close such large animals had gotten without me hearing them.

I blinked my eyes, and the ghosts were gone. No snapping branches or hoof beats; they had just vanished into the waning light. 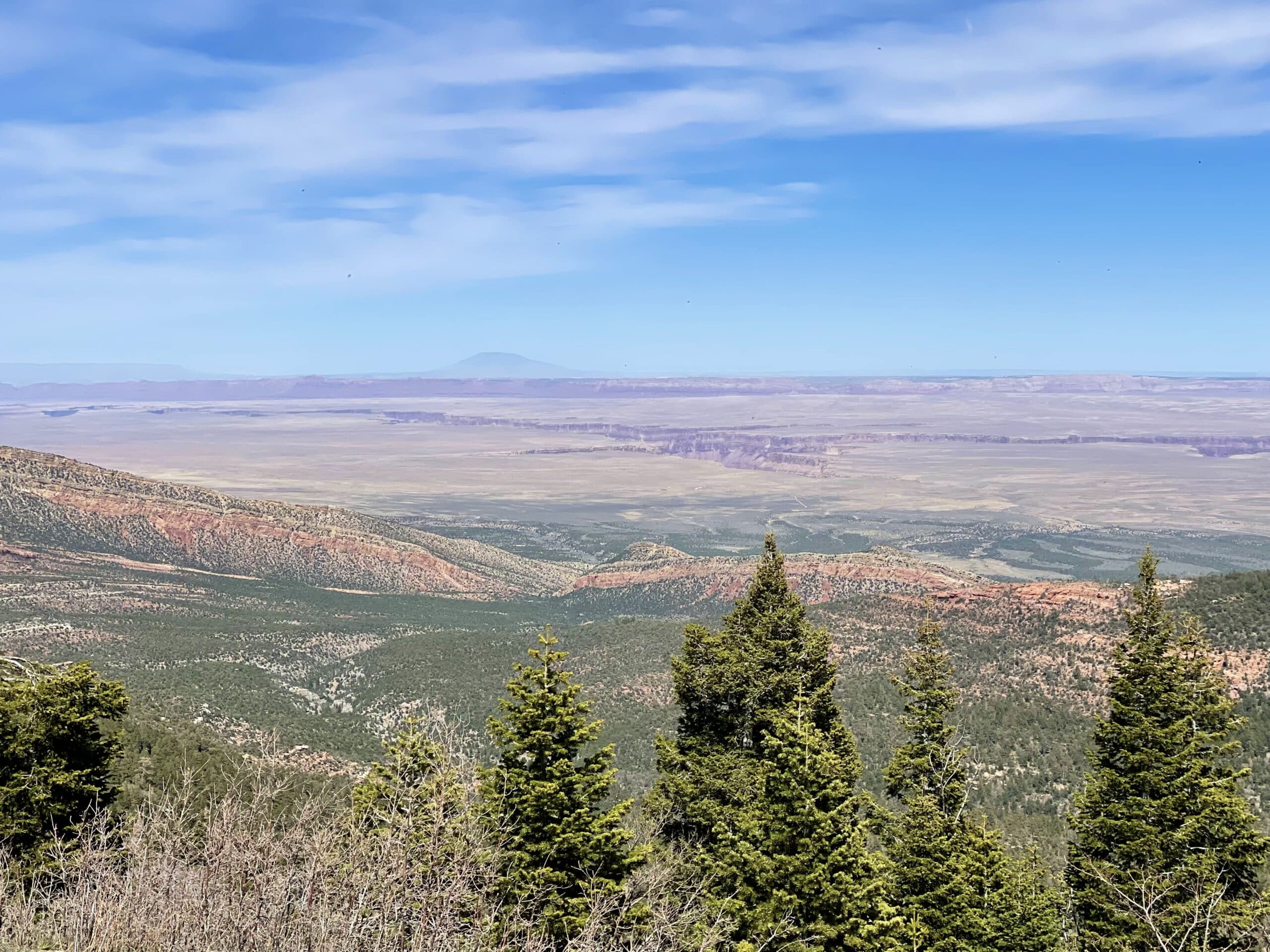