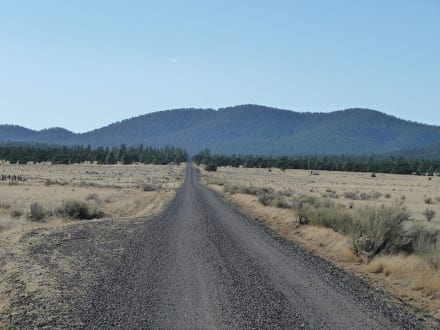 Grants, New Mexico would be my next town stop. Town stops always offered a love/hate situation for me. One of my problems with long distance hiking is that I eat fairly bland foods on the trail, often in smaller quantities. I then get to town and eat every type of food available, in the largest quantities possible. All will power goes right out the window! Pie Town was no exception, and having not learned my lesson the other 200 times I had done this, I had again suffered.

Having an upset stomach while backpacking down flat dirt roads, with empty land on either side was challenging. Trying to climb through rusty barbed wire at a dead sprint, WITH a large backpack, added to that challenge. Thankfully, there was little to no traffic.

Around mid-morning, I took the turn onto Wild Horse Canyon Road. I trudged along, with my eyes fixed on the road in front of me, before glancing up and slowing to a stop. I watched long tendrils of smoke rise over the ridge in the distance. There was no manufacturing or production in the area, and I doubted anyone would intentionally be burning ANYTHING in this dry land. It could really only mean one thing – a wildfire. I pulled out my map, studied surrounding routes, and turned to begin my walk back out to York Ranch Road.

York Ranch Road was a main artery. Out here, dirt roads could also be classified as main arteries. The roads did not have to be paved. Although the route would be longer, I would head north on York Ranch and cut across either Arajimo or Homestead Canyon.

Unfortunately, the route through both canyons was due east, and in both instances I watched growing clouds of smoke billow over the ridges. It looked like the fire was growing, so I decided to stay on York Ranch Road until I reached Highway 117. I would then road walk 7 miles back up to the arch, and pick up the trail.

The day was hot and dry, and I was running low on water, when I spotted a windmill about 200 yards off the road. Windmills often meant water, so I headed cross-country to check it out. In the distance, I saw what appeared to be a black cow also making it’s way towards the windmill, but did not pay it much attention.

There was a small fenced in area next to the windmill, and I thought I could see a water trough (tank) next to it. My pace increased as I grew closer, and I glanced over to see that the cow appeared to now be trotting. Cows don’t often move fast, so I studied it a little more closely. It seemed to also be watching me, and as it slowly began to veer towards me, I sped up a little more. Maybe it thought I was bringing cubes.

As I sped up, so did the cow. I realized it was going to reach me before I reached the fence. Where were it’s cow brethren? Cow’s typically are in herds out here. Can cows get rabies, I wondered? I suddenly wanted to reach the fence before the cow, and began running awkwardly with my heavy pack. The cow started trotting faster, now clearly headed towards me. Maybe it was a predator cow and I should not antagonize it by moving quickly. I stopped running.

The cow did not slow, so I made a sprint for the fence. The cow now appeared to be at maximum speed. We both reached the fence about the same time, and I veered suddenly right, going behind the huge lumbering beast as it tried to slow and turn. It’s momentum was too much for it to stop quickly though, and I was able to dash behind it and hit the ground, crawling quickly under the fence.

Standing, I turned to see the rabid cow staring at me, it’s nose pressed up to the fence. I stood breathing hard as I brushed gravel and dirt off my knees and hands. The cow continued to stand staring at me, breathing heavily. I looked over to see the trough was dry. Maybe the beast was crazed from dehydration. I really did not know much about cows, other than it appeared far more aggressive than any other wildlife I had encountered over the years.

I ended up sitting in the small corral for almost two hours, waiting for the crazy cow to finally wander away. Nothing I threw at it seemed to deter it from it’s human target. The thing was creepy just silently standing there studying me. When it finally left, I jogged back out to the dirt road, and continued on to Highway 117.

Reaching the highway, I had begun my road walk, when a couple pulled over to ask what I was doing. The CDT was still a relatively new trail, and people were often curious when they saw a lone backpacker. I explained the trail to them, and they asked if I would like a ride into Grants.

After about 5 seconds of thought I said yes. This would allow me to pick up my resupply box in the morning, and not have to wait until Monday. I would leave it at the hotel, and come back out here tomorrow to do the road walk into town.