Sam Hughes Shuttled me to the CDT Near Hachita, NM | Average Hiker 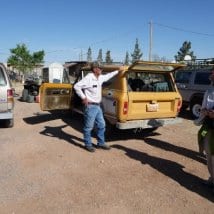 My pack was wrapped in a plastic bag, and I quickly spotted it moving towards me on the carousel.  Fortunately, the airline supplied the bags. It kept any miscellaneous items from falling out of the pack and prevented plastic buckles from getting snagged as indifferent baggage handlers tossed about the pack.  The backpack’s dirty, rugged exterior was also apparent through the bag – yet another handling theft deterrent.

Sam Hughes had told me to meet him at the bottom of the escalator and described himself as a “dusty old gold miner.”  I hurried past Amy, mumbling “hi” as I increased my speed towards the moving steps.  I was eager to meet Sam and begin the road trip back to Hachita, NM, and Sam’s home.

Sam and I had set this up via letter several months earlier.  He had a phone but preferred snail mail and had never seen or received an e-mail.  So far, the CDT was living up to its desolate reputation.

I impatiently stood on the escalator with the backpack slung over my shoulder, descending towards the beginning of the hike.  As the upper floor dropped away, I looked over the rows of plastic seats below me. I spotted one lone individual seated in the middle of the first row, looking towards the escalator, and immediately noticed the large CDT emblem he was holding against his chest as he leaned back in the seat with legs sprawled out in front of him.

Glancing at his dusty boots, my gaze worked its way up the old jeans with the cracked leather belt, pausing on the faded plaid shirt surrounding the CDT sign.  A pack of generic cigarettes was sticking out of a shirt pocket, and as I glanced up at the weathered face, it took all of my willpower to maintain composure and remain expressionless.

A small piece of nose remained in the middle of the tanned, weather-beaten face.  I smiled quickly to hide my shock, and a pair of bright, intelligent eyes lit up as the older man grinned back at me.  He slowly stood, and I swear I could hear the joints creak from 20 yards away.  Sam stuck out his rough weathered hand as he stepped towards me, using his other hand to push back the baseball cap perched on his head – dry, wispy brown hair jutting out from beneath the hat behind his ears.

“Hi – I’m Sam,” he said as he paused, allowing me to close the distance and take his hand in a quick, firm handshake.

“How was your trip?”

“Where is the other one?” Sam asked as he peered around me.

“She is grabbing her stuff.”

I heard Amy introduce herself to Sam.  She must have sprinted to catch up that quickly.  She then explained the trip, layovers, and all other aspects of the flight from NY.  Sam began walking, and I slowed my pace to follow behind, allowing Amy to focus on a new victim.  Listening, I learned Sam really was a gold miner and had lost his nose to cancer.  Exiting the silent sliding door, he quickly lit a cigarette and explained all this on the walk to his van.

We followed Sam to an old mini-van, and I insisted I sit in the back so Amy could sit by Sam.  I wanted to watch the new landscape in silence and absorb my surroundings.  Sam seemed much more patient than me, and I thought he might enjoy the conversation on the hour or two drive to Hachita.  Amy was fired up, and I half-listened as the hills raced by the van, asking an occasional question when I could slip a brief question into the conversation.

I leaned my forehead against the window, gazing at the alien desert landscape.   This was not like the Pacific Crest Trail Desert in Southern California. Desert and scrub were surrounded by jagged, black slabs of rock that pierced the sky, and as the sun dropped, I felt an emptiness seep into me.  Everything was so barren.

There was no movement or life among the deepening, purple shadows.  Across the sands, scattered points of light in the distance blinked and winked amongst the sandy, rock hills. Occasionally, we would pass large trucks mounted with massive antennae and dishes.  Sam told us these were used to detect movement and sounds across the land – I assumed illegal immigrants.

We reached Hachita after dark – driving through what appeared to be a deserted town.  One or two buildings had soft light seeping out behind curtains, but most were dark, hulking shapes – barren, wooden structures that slid past headlights before slipping back into the empty shadows.  This was a town long forgotten.

Pulling through a gate into Sam’s yard, he told us we could pitch our tents in his yard, and he headed inside an old, wooden-framed home for the evening.  I got my water from an old hand pump behind the house and set up my Wild Oasis Tarp.  I threw all my things inside the tarp, climbed over my pack, and paused to hear someone approaching.

“This looks like a good spot,” Amy said as she set up her tent immediately next to mine.  Our shelters were touching, and I could hear her every move.

The yard was large, a clear half-acre, and our two tiny shelters huddled together against the cold night.  I could already feel my frustration rising, and as I moved and organized everything around my sleeping pad, I was already planning numerous routes of escape – the highest potential option seeming to be one of the men we were meeting tomorrow.

I was sure one of the men would be more charming than me and offer better companionship for Amy. There was no way she could enjoy the company of someone that never spoke except to grumble a muted reply occasionally. The introvert in me was screaming to be let loose into the desert!

I listened to Amy until I became sleepy and dug out my earplugs. Tomorrow was going to be a long day, so I said goodnight, received no reply as I doubted she heard me and quickly fell asleep.