The rain was coming down in sheets as we drove across the state of South Carolina, headed for Oconee State Park and the western terminus of the Foothills Trail. I looked out the window of Dad’s suburban and sighed. Starting a hike in a small typhoon was not much fun, but at least it was relatively warm, and the rain was supposed to stop tomorrow.

Our last stop was for a biscuit and coffee before we left the highway and began taking back roads to the park. Dad had set his GPS on the shortest route, not the fastest, so at one point, we left paved roads and appeared to loop around through sets from “Deliverance.” Dorothy was nervous when they dropped me off in the woods and kept repeatedly saying that she could not believe they were “leaving me here.”

On the other hand, I was excited, and as we pulled into the small parking area near where I would start my hike, I felt the weight that always lifted once again rise from my shoulders. As I waited for Dad and Dorothy to get out of the truck for a picture, I gazed off into the unknown woods, eager to start this next journey.

The Foothills Trail is just that. It traverses the Blue Ridge Escarpment, linking Oconee State Park to Table Rock State Park. While planning to attend a family reunion in Columbia, SC, I discovered the trail. I always tried to find a trail near where I would be traveling, and since Dad would be driving up to his home in Cashiers, NC, after the reunion, I convinced him to drop me off at the Oconee State Park terminus.

The air was thick with the pungent scents of the surrounding forests – wet pines, oak, and laurel permeated the damp air as I hugged my parents goodbye and crossed the narrow pave road to the beginning of the trail. A small smile softened my face as I tilted my head back and took a deep breath of the familiar scents. It smelled like home.

The forest was silent as I walked along the easy wide sandy trail. Rain was falling, and everything was undercover, waiting for it to stop. I popped up my umbrella and turned side to side, studying the dark woods around me. This wide-open trail was perfect for the umbrella attached to my backpack, and I liked being able to hike with my head up and take pictures without worrying about my phone getting wet.

The use of umbrellas is always up for debate, but I’m a fan and have used one for years. People think umbrellas are just used in dry, hot environments, but I find them most useful for rain, especially cold rain.

Three and a half miles of easy hiking brought me to my first campsite. I was curious about the types of campsites on this trail and headed down the spur trail to check it out. There were two other hikes down amongst the Laurel by the creek at Tamassee Campsite, so I looked around quickly and headed back up to the main trail. They were probably hiking in my direction, but I did not see them again.

After a moderate climb, I came out of the woods into the Cherokee Parking area. Two women in an SUV were leaving, and they stopped their car to chat for a minute. They wanted to know how far I was hiking and what gear I was using. Over the course of the conversation, I learned that one of them was from my home town and we had gone to the same high school. She was a couple of years ahead of me. I’m always amazed at how small the world becomes on these trails.

Hiking the rest of the afternoon was easy, with occasional moderate sections, and the rain stopped in the late afternoon. There was plenty of water with gentle gurgling creeks and even a few small waterfalls following two days of rain. Most notable was that every single water crossing of any size had some bridge. This was a well-maintained trail.

As dusk approached, I began looking for a campsite along the Chattooga River. Many were large open spaces by the water, and I wanted to find something out of sight of the main trail.

I finally found a site where the trail began to swing away from the water. It did not appear to have been used recently, although there were hooks in two of the pine trees where it looked like a tarp or hammock had been hung. I set up camp, made dinner, and walked down to the water, where I climbed onto a rock and ate while looking down the river.

Once it began to grow dark, I headed back to camp, but this time I walked around the other side of the large tree above my tent. Looking down, I saw a large pile of old toilet paper. I exclaimed in disgust. Unfortunately, this would end up being common on this trail. I bypassed several campsites because of TP on the ground, and a couple even had wipes hanging in the bushes. For the rest of the hike, I did not use the campsites.

Side note – In October, I hiked the Superior Trail. They have a simple latrine system for their campsites. They are simple toilet seats with no privies. I was a little taken aback at first because I’m modest, but I quickly grew used to them and even appreciated them by the end of the hike. I never saw one piece of TP on the ground. 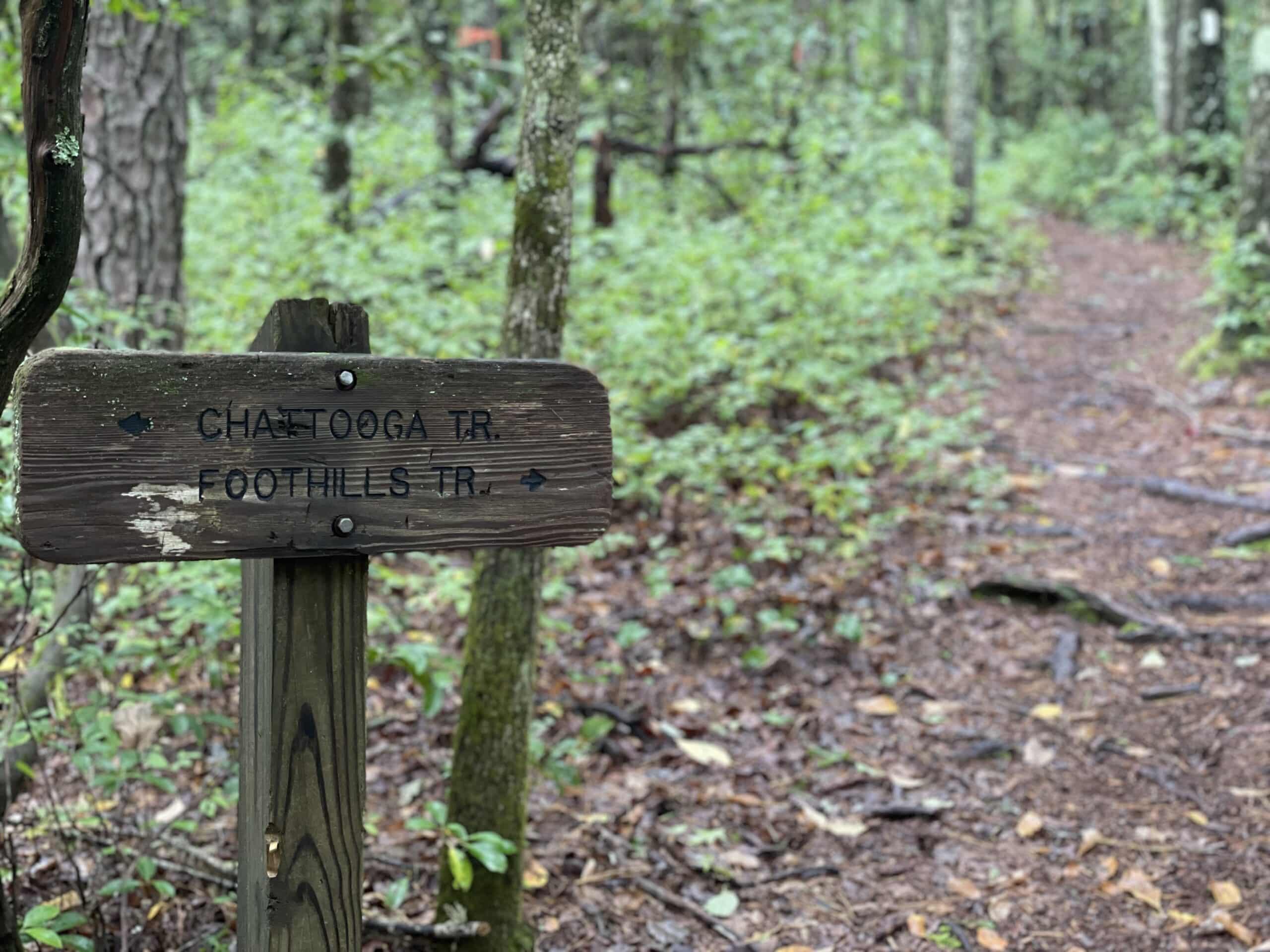 9/11/2022Mile 27.1 – 16.1 miles I jerked awake as something crashed through the bushes near my campsite in the dark! This was to be the… Read More »Foothills Trail Day 2 – Chattooga Camp | Average Hiker