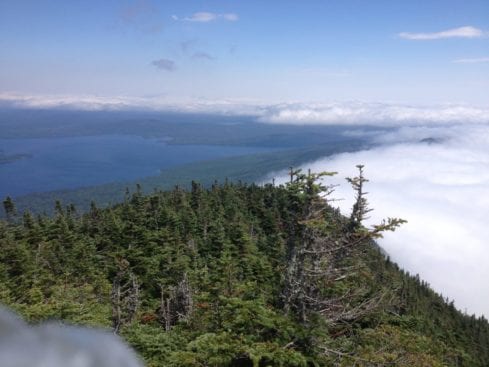 I HATE when I hike unnecessary miles. When the realization hits me, I feel my stomach sink, and the screech of frustration usually silences the woods around me. Today included about six “lost” miles on the “Hemlock” Trail. I still have no idea how it happened. Sometimes I get lost in my head as stories play out, and I look up, startled to see it is an hour later. The same thing happens when I drive occasionally.   I’ll surface to find myself 50 miles further down the road without memory of what was passed along the way. I expect, in this case, that the rain did not help.

I put my head down and hiked, watching my feet and the rocks and roots ahead of me. I never even noticed when the trails split apart. I only realized my mistake when I glanced up, searching for the white blazes. I stopped dead in my tracks as I approached a tree with a clear blue blaze and lightly groaned. I was disgusted. I think I muttered the entire hour back to the AT.

The rain spits every morning as I hiked through the Bigelows. I would glance at the viewpoint signs and climb through the hazy, misty clouds. Finally, as I summited Avery Mountain, the clouds rapidly cleared, and I had the most amazing views from the sub-alpine peak. I looked across the rest of the range and down the lakes below. It was a breathtaking sight and an excellent place for lunch.

As I was finishing lunch, a group of six NOBOs stopped talking. They were young, so I did not expect much conversation. At this point, most NOBOs were on a mission. They could smell the finish line, and the intensity they hiked left little room for chit-chat. This group was different, though. They seemed relaxed and enjoying the end of this long journey. They asked me about the trail ahead and where I was from in the US. I told them the state, and one of the girls grinned at me and asked where. I told her, and she started laughing. She was from the same small town. There are a lot of coincidences out here.   It was fun to chat with them for a few minutes, but I saw the expected restlessness spread relatively quickly through the group. Some had started moving on, and the others were watching, wanting to go but also not wanting to be rude. Finally, I stood and said I needed to go, and they all smiled in relief as they said goodbye and moved quickly past me. Watching them skim across rocks I picked through like a tiny elderly gnome was terrific. I hoped I would be as agile in a few hundred miles.

The day was a foot pounder, and since I had given away six miles, I decided to stay at Horn Pond instead of pushing for the town. It appeared it would continue raining into the evening, so I needed a good tent site. I reached the turn-off for Horn Pond and headed slowly down the side trail, looking for a campsite. There were typically plenty of sites near shelters. Unfortunately, all the sites I passed looked like low-lying mud holes. The cleared sites were muddy dirt that I knew would fill with water at the first good downpour. I decided to spend my first night in a shelter.

There were two shelters at this location. The three side shelters probably got a lot of traffic during the summer, being close to town and near such great views. I turned to the shelter on my left and was greeted by two men and a couple. They were all very friendly. The couple immediately told me they were staying in the other shelter, so I decided to stay there and let them have the other shelter themselves.   I began to unpack and chatted trail with the two men as I set up everything for the night.   We fell asleep at dark, for maybe thirty minutes.

It was a tough night. I am one of the lightest sleepers in the world, but even if borderline deaf, I probably would not have slept through the gurgling, intermittent bear snores from the man sleeping in the middle of the shelter. Unfortunately, my earplugs were useless, so I began packing around 4:30 AM, and by 5 AM was headed out into the dark. This is the main reason I don’t stay in shelters. Not only are they uncomfortable and often overrun with vermin, but the noises always keep me up, even with my foam earplugs shoved down my ear canals.

The prior evening, I had asked the section hiker how the hike down to the road would be the following day. He was obviously in good shape with a somewhat driven personality and said, “There was a fairly moderate grade with a few rocky patches, but I kept up a good steady pace climbing up here.”

I know how to translate this… First, I will rock pick straight down over rock slides, lowering myself with my hands and throwing down my poles as I drop a few feet to the next slippery, sharp pile of rocks. Then, I will skooch across wet slimy rocks on my butt and move about one mph. My translation proved accurate, but I was mentally prepared, so I skooched and grumbled only a little as I worked my way down the mountain.

I was headed for town, and visions of food blocked most thoughts of immediate difficulties.