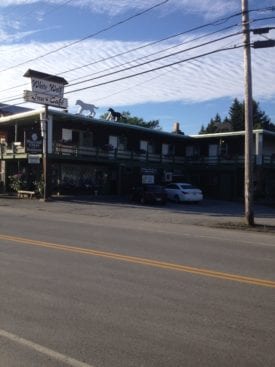 I rounded the last boulder and saw the trail open up before me. I stretched my legs, grinning in anticipation of town. I was also hoping to generate a slight breeze, as I was soaked and did not want to catch a ride and ruin someone’s upholstery. If I moved fast enough, my body heat and the wind might dry my shorts. There were disadvantages to heating up after being out for a few days, not worth mentioning, but I would put on my jacket and zip it up tight for the ride.

I reached the road, dropped my pack to take out my wind jacket, and straightened up. I also took out my cash, cards, and ID and put them in my pocket. I kept them in a ziplock bag to stay dry and always took them out of my backpack before hitchhiking, just in case my pack and I separated. I had heard numerous horror stories of people climbing out of a car after putting their backpacks in the back to have the car take off. So I strapped my hiking poles to the sides of the backpack and headed over to the blacktop to try and hitch a ride.   Parents everywhere probably cringe at that last statement, but I have never had a wrong hitch in my years of hitching hiking. I will say that I have turned down almost as many as I have taken, usually just stating I was waiting on my friends who had not arrived yet. This has usually happened due to the abundance of beer cans and liquor bottles rolling around on the floorboards or a gut instinct that told me to pass it up and wait. I’ve always trusted my instincts, even if I have had to wait for hours.

There was very little traffic, but I knew Stratton was a very trail-friendly town, and it was often easier to get a ride the further I was from a large metropolitan village. I was lucky and got a quick hitch with Dave in his Subaru wagon – a nice guy. We chatted easily as we headed the short five miles into town. The topic was still the disappearance of Inchworm, and we talked about this as we zipped along the wet blacktop. Dave knew people that had assisted in the search for her, and everyone was confounded by how she seemed to have just disappeared. He did say th However, hehe northern Maine woods were incredibly dense, and locating someone was next to impossible, depending on where they had vanished.

Dave dropped me off at a hotel where I’d made a reservation a few days earlier. I walked into the hotel and looked down the hall towards the hostel, where several hikers were hanging out; draped across furniture were numerous articles of clothing. I was reminded of my years playing sports and the smell of many locker rooms. I was told where to find a phone and given the owner’s number.

Unfortunately, she was out shuttling hikers and would not be back for a while. I called the owner and was very disappointed to find she had forgotten to write down the reservation. There was zero remorse as she told me there was room in the hostel (negative) and then told me to try next door. Her lack of apology was frustrating, but I remained polite (the hiker’s world is small) and headed across the parking lot to the White Wolf Inn.

It all worked out for the best since I think I was probably happier with the room at White Wolf Inn, and the owner was friendlier. I may sound a bit needy here, and I know mistakes happen – I get that, but a little remorse would have been good from a service perspective.

I headed next door and wandered outside the hotel, looking for somewhere to try and ask for a room. I  heard “hello” and glanced up to see Mack and Two Speed, two NOBOs I had met the previous day. I had been climbing through the rain clouds when they came barreling around a corner, in a notch between peaks. We had paused for a minute to share generalities – where are you going, where are you coming from, when did you start, where should I stay, etc., but they were slack packing and needed to make miles for their pick-up ride back to Stratton.

I asked them where the office was located, and they told me where to find the person cleaning the building. They then offered to let me use their room until I could check-in or someone showed up. They were getting ready to head back out.

I dropped my backpack in the room and found Tammy a few minutes later in another room. She was fine with me hanging out in the room and told me some rooms were available and she would call me when a room was ready. I could find the owner later in the day and pay whenever. I love small rural towns. This type of trust and hospitality, or blind naiveté, as my northern friends would tell me, was very similar in my southern home.

I hung out for about thirty minutes in the room of the other hikers, sitting on the edge of a bed and reading a newspaper I had found on the porch outside. I LOVE local newspapers.

Tammy finally poked her head in and announced my room was ready. I followed her around the corner and walked in to find a single bed and two bunk beds. I was a hiker. She probably assumed the rest of the hoard would arrive later.

I spread my gear everywhere (the more beds, the better) and headed straight for the shower. I scrubbed myself off several times and immediately took off searching for food, lugging my tiny bag of filthy clothes with me. After the day’s first meal, I was excited to find a laundry to wash my clothes and shoes. Finally, I took off for the grocery store to resupply and returned to the room with a few light snacks for the evening. It was still reasonably nasty outside, and I did not feel like running back into the weather again, even for food.

I spent the rest of the evening eating, blogging, and packing. I wanted to get up, shower, and have an excellent leisurely breakfast without worrying about anything but snagging a ride back to the trail the following day. It was good to relax and do nothing for the rest of the evening. I had heard the next section through the Crockers was challenging and needed a little leg rest.