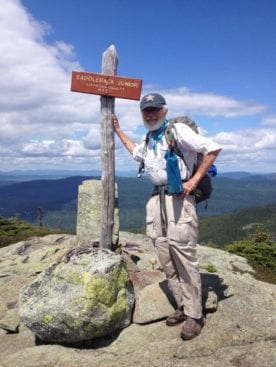 I slept covered entirely by my Nunatak quilt, waking every 30 minutes to pull it tightly around me, blocking intermittent gusts of frigid air. It had to have been in the upper 30s – probably the coldest night so far. The quilt had straps that slid under my sleeping pad, but I had been too frantic to get out of the previous night’s cold to take the 2 minutes needed to strap my blue down puff ball in place. So instead, I had stayed awake for hours trying to shift it into precisely the correct position to block the arctic breeze. Maybe a tad short-sighted, but still too lazy to remedy my short-sightedness.

I laid still for about 30 minutes, watching a sliver of morning grey, under the edge of my Hexamid, brighten into the early morning, steely grey that even LOOKED cold. I stretched under the quilt, awkwardly put on my nasty hiking garments tucked at the foot of my quilt (the quilt has a toe box), and then mustered the will to move, counted to 10, and bolted from my snug, warm cocoon.   I shoved some snacks in my pockets and began to pack fast, trying to keep moving to stay warm.

I headed up to the shelter to find the Privy and then back to the creek to get water. I think the other hikers in the shelter were a little confused when I walked up with my empty water bottles and asked where I could find the Privy – confused or a little disgusted. I liked to be efficient in my morning activities, the goal always being to walk as few off-trail steps as possible. Unless on the trail or searching for food, trail-less efforts were non-value added.

I quickly finished packing, hiked about a mile up the trail to warm up, and sat on a log to eat a couple of bars and send a quick text. It was my check-in text, and since I used Verizon,  I could get a signal most anywhere, on any trail. I’ve tried the other carriers – blah.   Suddenly, I heard a soft crunching of feet and turned quickly to spot Sandman, who bellowed out an exuberant “good morning!”  I smiled and said hello, while my inside voice said, “Way too early for this much happiness.”  I immediately liked him.

Sandman was a flip-flopper. I think he had started south, hiked halfway, then traveled north, and was now hiking back south. I believe his destination was Pennsylvania. I also learned he was from Myrtle Beach, SC.  Again – a small world, as this was one of many of my old southern stomping grounds. He was a strong, wiry little man that wore a white button-up, cotton hiking shirt, and tan cargo hiking pants. He was dapper with his bright white beard, baseball cap, and snazzy hiking clothes. There was a little more blood than I expected on the clothes, but he appeared pretty lucid, so I was not too concerned.

We chatted for a few minutes while I finished a horrid bar, and I then told him to hike on and I would follow and chat. In our small hiker community, it was surprising to find we were both from the same state and probably lived 150 miles apart. We talked alike, used the same expressions, and laughed at the same goofy things. It was as if I was hiking with another little bit of the south. We fell into an easy rhythm and chatted for hours as the climbs rolled by.

We had three big climbs for the day (Saddleback Jr, The Horn, and Saddleback). They were all tough knee crunchers, with hand over hand climbs at times, but the views were incredible. Down south I love the bald mountains. I loved the above tree line and alpine views in the northeast, and we had a few of those.

We did not reach the summit of the final climb up Saddleback until 5:45. A passing hiker had told us the six-mile descent was a nice easy downhill. Again, all relative. That hiker had clearly been raised in either the Rockies, Sierras, or on Everest. We headed down, and as we got closer to the last shelter I told Sandman we should begin looking for tent sites. It was late, and I had no desire to roll into campsites full of teenagers again.

Sandman needed water, so we stooped at a creek draining into the far end of Ethel Pond. I told him to go ahead and get water while I searched for some good sites. This was too good a location not to have them. I followed what looked like an old game trail up into the woods away from the pond, and about 70 yards later I came out onto an old woods road that was clearly no longer used. There was an old fire ring on it, but best of all, it was flat as a pancake, and you could have set up 10 tents. This was stealth camping at it’s best. I went and retrieved Sandman, and he followed me back up, where he agreed we were “home.”

We both set up our tent and tarp, and I heard Sandman crank up his jet engine stove as I climbed into my tent for the night. I organized and nested for about thirty minutes, and then settled in under my quilt. Once I stop the forward momentum, the engine usually shuts down quickly, and I immediately fall asleep. I would sleep hard until about midnight and take every hour after that as the night came alive with creeks, groans, cricks, and snaps. One world went down, and the other awakened. Thank goodness I had my cuben fiber fabric for protection.

I was getting in better shape, but my body still needed all the time it could get to recover, so I always slept 10-11 hours, waking at last and first light. I pulled off the one band aid left on my feet, that was still on one weak toe, and rubbed my feet. I always uncover them at night, so they can dry out and breathe. I was thrilled only to have one blister left. They had toughened up more quickly on this hike, or rather my skin was just old and rough now, and not the tender, delicate skin of youth. I would definitely take it!