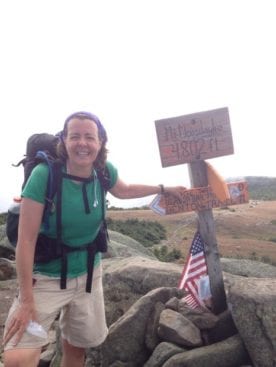 The climb over Mt. Moosilauke was fun this morning.  I would not have called it fun four weeks ago, and albeit it slow at times, I can now climb without stopping.  I am sure those ahead of me on the trail think a large heaving bear is approaching from behind, but this too shall pass as my fitness increases.

As I approached the summit of the mountain, I saw a large Staffordshire Terrier watching me from the top of a low rock wall, wagging his tale in a joyful greeting. His name was Chester, and he was beautiful.  I was as happy to see him waiting on me as he was to be waiting for me, and I got lots of bully dog kisses upon arrival. He was one happy fella!  I love that breed.  They are just the sweetest dogs if raised well.

Following lots of hugs and kisses from Chester, I asked a NOBO named Bison to take my picture.  He was celebrating at the summit with a Pabst Blue Ribbon.  At this point in our hikes, all carbonated liquid is a treat…even PBR.

I was pretty excited as I started down the mountain.  I was leaving the Whites.  I had climbed without stopping (although at a very slow pace).  I had hugged a pit-bull….and the icing on the cake was that sure enough, two miles from the road, the terrain began to change and flatten out.  Southern Maine and the NH White Mountains had beaten and bruised me.  I had heard that after Mt Moosilauke, I would enter Nirvana, so I was a bit taken aback by “the hiker.”  I turned to watch him pass, and frowned.  Why was he wearing a head net?  Just about then, a noseeum dive bombed my eyeball, and at least three mosquitoes latched onto my thigh (sigh).  It appeared I had traded tough terrain for warm temperatures and vicious, biting insects. Why did there have to be a trade off? Couldn’t it just get easier?

I stopped for lunch at Jeffers Brook.  I began to unpack my snacks, and was swarmed.   Twenty minutes later I was stomping down the trail, slapping at my legs and muttering bug obscenities.  I had left those monsters in Maine!  What the hell were they doing here?  I could only assume they I was migrating south with warmer seasons and more insects.  Damn

I headed across the road that led to the Glenn cliff Hostel and paused to read a sign that was posted. There was a Labor Day Hiker Feed today a the hostel about a half mile down the road.  Although tempting and generous, I knew I would loose a lot of time and probably get sucked in to the festivities.  I am also a little shy (no comments from family and friends please) with large groups of people I don’t know.  In addition, I was also still very excited about the rolling hills with few rocks thing going on, and really wanted to hike some more.

I continued on, and made it to NH 25 around 6:00.  I stopped to get water at the creek, and looked up towards the road to see a Town car pull up.  Town cars are always involved in drug deals on SVU, and associated with other seedy activities, so I was a little wary, and focused on filling my containers a little more quickly.  I packed up and walked up to the road, cautiously walking out of the trees.  Looking to my left, as I stepped onto the road, I saw a woman eating something, and she started as she saw me.  She quickly finished the food and mumbled something about not liking to eat in front of hikers.  I completely understood, as much like bears, thru-hikers can become very aggressive around food.

I was to meet Punkin, who offered me an ice cold Coke.  I immediately liked Punkin, and she pulled out two stools and we sat and chatted.  Punkin was supporting her husband Hamster on the AT.  She would pick him up each evening at road crossings, and drop him off the following morning.  She also kept a cooler full of sodas and snacks in the trunk of the car, and sincerely seemed to enjoy the hikers.  I had met other people doing supported hikes, and they almost always included very supportive spouses.  These supported hikers always seemed to really enjoy their hikes.  They were also a great source of hand outs.  I had met one couple on a hike, and often encountered their camper at road crossings, with a small buffet and chairs to relax.  I had learned to time my appearances around their schedule, where I would appear shocked to find them on the roads when I came out of the woods.  “What a coincidence!” I would exclaim.

A few minutes after meeting Punkin, two other female thru-hikers came out of the woods.  They were also rarely seen SOBO hikers.  Punkin offered them soda and cookies, and although they seemed about to become aggressive, they simply did a little jig and chortled in delight.  SOBO trail magic was not common, and we became very excited when encountering it.  I believe I had also done a little dance of delight at the sight of a soda.

The two female SOBO’s announced they were going to stay by the road for the evening since there was a water source.  I said I was moving on since I always tried to stay at least a mile from any road.  I don’t think it is safe to tempt fate, whether single or in a group.  Most hiking horror stories occur near roads, or where people congregate, such as shelters.  How many bad guys are going to walk in a mile for the chance of finding trouble, when it is waiting for them at a road or shelter.  I would often, not only hike in, but also hike out of site of the trail.  I had actually been followed once on the PCT, and maintained a healthy wariness of strangers along any trail.

I moved on, up over Ore Hill, and started searching for a spot to set up my tarp.  There was what appeared to be a clearing through some Spruces, so I headed in that direction.  I knew it was going to rain tonight and tomorrow., and I needed something high and dry to drain the water away from my tarp.  I most often find a place with a lot of duff or leaves in the woods, if rain is imminent.  I often grab water and then carry it for a couple of miles until I find something.  Established tent sites are like water pits.  I often hear hikers exclaim about how they got flooded.  I careful about where I camp, and don’t ever recall being flooded, or even getting much splash under the edges of the tarp.  Tent/tarp placement is important.

I set up past a small pond on Ore Hill.  I could hear thunder rumbling in the distance, and a few drops splashed onto my arms as I set up quickly and jumped under the tarp.  I pulled my pack in and placed my pack cover over it, and my rain jacket over the bottom of my sleeping quilt, just to protect it from any potential splash.  I always carried a down bag or quilt, and worked hard to protect them from getting wet.

The forest was dark, and the thunder drew closer, with lightning flashing around me.  I snuggled down under the quilt as rain began to pelt the tarp.  I loved the sound of the droplets on the tight fabric, and within a few moments I was lulled to sleep.