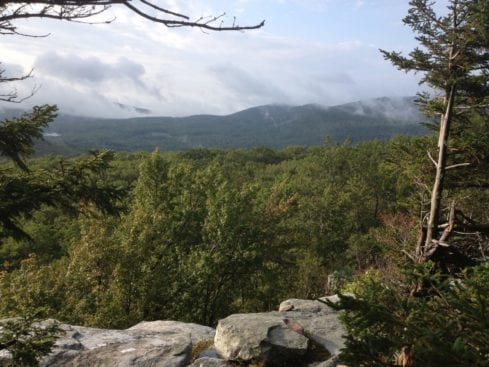 I listened to thunder storms and passing showers all night long.  Like any proper weather front during a hike, it waited until I was packing up the next morning before it gave a loud crack and began to rain in earnest, the skies parting and releasing what felt like a solid sheet of water.   I dragged my pack over under the canopy of a tree, and ran back to grab my tarp, and everything underneath it.  Packing in the rain was never fun, but between the tree canopy and my umbrella, I managed to keep everything marginally dry.

It rained seriously for an hour or two, but I stayed relatively dry under my umbrella, until the rained had slowed to intermittent showers for the rest of the day.  The rain was fairly light through the afternoon, but the drenching I received from passing trees and bushes kept me fairly wet.  I did sometimes wear my rain jacket and pants, but it was warm enough that I had left them off.  I hated wearing the constrictive gear unless I had to.  The wet, sticky, plastic like material stuck to my skin and I detested that clammy feeling.  I had tried all water proof and water resistant material over the ears.  Breathable was really a joke, although they all claimed comfort, dryness and breathability, so I just bought fairly cheap waterproof rain gear, and only wore it when absolutely necessary.  It was good in cold and windy environments, so I did not carry insulated pants when cold, but only wore my  rain pants.  The rain jacket I wore mostly when cold also.  This also kept my gear lighter.

The rain did keep the mosquitoes at bay, although as it slowed, a few managed to slip in and steal a nip.  The rain also made climbing Mt. Cube a little tricky.  I climbed, or rather wound my way up to quartz outcroppings, and then I swear the trail circled the mountain finding every quartz outcropping and ledge it could locate.  On quartz, even the effective water bug maneuver is ineffective.  Quartz plus rain equals very slick footing.  Mt. Cube provided a couple more bruises to the collection I had gathered in southern Maine and New Hampshire.  The one other thing noticeable about the trail now, was that it was far less direct.  In Maine I hiked straight up mountains, and picked my way straight down the other side, avoiding large amounts of roots and rocks.  In this more gentle NH, I wove my way around the mountain, zig zagging back and forth as I slowly made my way up.  I would take the straight up and down any day.  Switch backs were a waste of time.  I just wanted to get to the top, pausing to heave as I looked out at the rolling views.

Late in the morning, I noticed someone had slipped sand paper into my shoes. Walking with wet feet has NEVER been an issue for me. I even ford streams in my shoes and keep hiking….no problem.  This time was a little different though.  My shoes were worn, and some silt and sand had washed into them with the water.  I did not pay it much attention, although the little warning voice in my head, the one that knew better, warned me to stop and clean off my feet and put on dry socks.  I ignored the warning and continued to hike.

I stopped on top of Smart’s Mountain, at the Old Fire Warden’s cabin, and decided to take a look at my feet. They were really starting to hurt. I stripped off my socks and my mouth dropped.  I could  not believe that in only a couple of hours, it appeared the majority of my skin had been rubbed from my toes.  I spent the next thirty minutes bandaging my toes, and talking to another SOBO (Mayo) that had started on 6/20. I am slowly beginning to catch up with the end of the SOBO pack I think.  I stood to leave and gasped softly.  My feet were screaming.  I have done a bit of hiking, and had never had this happen. I hobbled out into the mist,  waiting for the ibuprofen to kick in and my feet to go numb.

As I started a steep decline down Smarts Mountain, I saw a young NOBO girl leaning over the side of the mountain yelling “Mila!” She said her poodle had run straight down the side of the mountain and she was afraid she was stuck somewhere, since it had been an hour since she had left.  I was surprised by two things.  I did not realize a pack was made small enough for a poodle, and two, that a poodle had hiked all the way to NH.  The girl was clearly distraught and not sure how she was going to get down to retrieve her poodle.  I asked if I could help, and she asked for a descent route recommendation.  I made a suggestion and she started picking her way down.

Suddenly, a large black standard poodle came charging up the mountain through the brush. Now that made much more sense.  It was a Standard Poodle!  Mila was immediately reprimanded, but really paid no attention, as I’m sure she also heard the relief in the NOBO hiker’s voice.  I wished them luck, and moved on down the mountain.

I picked my way along for another mile or two, and finally found a good place off in the woods, a nice level spot amongst the trees, with nice thick leaves to set my tarp over.  My feet really hurt, and I could hear the thunder approaching.  I had decided to stop a little bit earlier tonight.  I set up, took off my soaking wet clothes, and attended to my feet.  Many bandages had come loose in the wet shoes and were just floating around my toes, so the feet had further deteriorated.

I ate a cold dinner, nursed my injuries, and lay down to listen to the storms roll through.  I had smothered my toes in Neosporin and left off any bandages, to allow them to dry out while I slept.  I listened to rain begin to fall as I shifted my feet to keep them from sticking to the quilt.  I feel asleep quickly, knowing it was probably going to be a long night of tossing and turning.