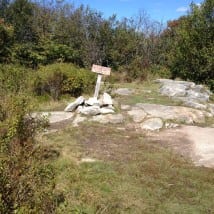 I laid in my bag feeling moisture falling on my face.  I frowned, but did not open my eyes.  It was still very early, far too early to begin packing up for the day.  I realized that it was raining so hard, the already saturated tarp was allowing rain through in the form of a cold mist.  I rolled over, tucked down into my bag, and went back to sleep.  I had recently switched to my Feathered Friends sleeping bag, and the material was more water resistant than that of my quilt.  There was really nothing I could do, so I just rolled over onto my side, tucked my head down into my bag, and went back to sleep.

By the time I woke up to the grey morning light of dawn, the bulk of the weather appeared to have passed through.  Everything was slightly damp, but I would stop to dry out my gear later in the morning, once I came to a clearing on the mountain.   One nice thing about the mountains was that the weather often came in waves, so I would seize the first chance I had at a little sun.

In addition to my regular morning routine, I spent at least 45 minutes bandaging my feet with my remaining Band-Aids and duct tape.  I had spent the night unsticking my toes from my sleeping bag, so I had a feeling my efforts at bandaging were not going to go well, regardless of my efforts.  I crawled out from under my tarp, and rose slowly to my feet, groaning as the raw pain lanced through my toes.  I was just disgusted with myself for allowing this to happen.

I finished packing my tarp and gear, and began my hobble down the trail.  Within five minutes some of the band aids were loose, and I realized a night’s rest had not resulted in any improvement.  I stood grimacing as Nomad walked up.  I exchanged trail info. with him, and another NOBO couple from Knoxville, TN.  I wanted to go into Lyme, NH to get some more bandages for my feet, but it appeared it was not a popular town on the trail, so I could not get much intelligence on what services were available.

I eventually saw the road into Lyme in the distance, and also noted I had no cell signal.  It had taken me three hours to do five miles over very gentle terrain, hobbling along on very painful feet, and my trail guide stated there was a small Inn in town.  I had realized I was clearly going to have to get off the trail for the night and tend to my feet.

I was so focused on the road that I almost tripped over a plastic pink flamingo, and a sign touting ice cream, water and a croquet match for hikers.  I remembered that Bill Ackerly was a trail experience, that other NOBOs I had passed, had mentioned.  I turned right up the little side trail towards his house.  I wanted to say hello, and to also ask if I could use his phone to make a reservation in town.  If I got lucky, I might even get a ride.

I slowly made my way up Bill’s driveway and saw three hikers playing croquet.  I was interested in the game, as my father and step mother have recently gone semi-pro, but ice cream and phone were the priorities.  The house was wide open, but Bill was out. I was surprised at how trusting he must be of everyone. He had a nice, well furnished house, and every door was open.  I felt as if I was back down south.  I dropped my pack, and walked up past the house to say hi to the three guys playing croquet.  They told me I could go in the house, but I did not want to go in without permission, so I picked up my pack, that I had dropped on the porch, and headed out to the road to try and hitch in to the Lyme Country store.

I stood on the road for 35 minutes looking as pitiful as possible, but the one car that passed completely ignored me.  I heard voices and saw a family and two dogs coming down the mountain, across the road.  The dogs charged out of the trees towards me, and without a pause the woman behind them asked me if I needed a ride.  I told her I did, to the Lyme Country Store.  She briskly told me to put my pack in the trunk, as she opened the back for it, and we climbed aboard and headed to town – me, the dogs, the woman, and her daughter.

Once in the car she asked if I needed anything else and I said no, I just needed to go to the store and then was going to look into staying at the Inn.  Without pause, she said her daughter was headed to college, and I was welcome to stay at their house.  I was a little shocked and said nothing at first.  I then blurted out…”Are you sure?”, and she said “Sure!”  She did not even hesitate, as if picking up a random hiker on the side of the road, and taking them to stay at her house was perfectly normal.  I just said “thank you,” and we began chatting about my hike.

The woman dropped me off at the store, saying they lived one block down.  I hobbled towards the door and the owner stepped out, and with concern stated, “You are limping.” I said I had messed up feet, and the M’s were letting me stay with them.  She said “good” as we entered the store, and I heard her tell another employee I was staying with the M’s.  It was a small town.  I’m sure everyone would know I was there within an hour.  I grabbed a few snacks, a lot of bandages, and headed up to pay at the counter.  The store really reminded me of home.  I love these small towns along the trails.

I balanced my bags in each hand, as I headed for the house, and once arriving, I found Ms. M had already taken my pack inside.  I was a little embarrassed at the state of the pack.  Poor woman, nobody should be subjected to that dirty, stinky backpack.  Finding Ms. M in the kitchen, I thanked her again for letting me stay.  She smiled and offered a shower and laundry, as she briskly moved around the kitchen taking care of chores.  I stayed out of the way as she moved quickly around the room.  Her daughter was getting ready to leave, and she was very busy.  I left the kitchen and eagerly headed upstairs to take a shower and do laundry.

I followed Ms. M over to the library across the street, to see if I could jump on the computer for a little bit.  I had a time limit, so was not there too long.  I then walked back to the house to find a note on the whiteboard in the kitchen telling me the dryer was all mine and to make myself at home.  Ms. M had left to go to her son’s cross-country meet, so I went up to the town’s Italian restaurant called Stella’s.  I walked in and was welcomed by what I think was the owner.  He was very welcoming, and commented on my hobble with concern.  The restaurant was surprisingly good, and had a great little bar and atmosphere.

I returned to the house to find Ms. M’s husband and son, both just as warm and welcoming as she was.  This was one of the most hiker friendly towns I had visited yet, and I had never heard a word about it on the trail.  The store owner, restaurant owner, librarian – all had been concerned about my hobble, and wanted to know how they could help.  It was a very hiker friendly town, and you usually heard about them through the trail grapevine, but I had not heard a thing about Lyme, NH.  Of course, a lack of hiker traffic could be one of the reasons they were still so accommodating.

This little town seemed to epitomize the values and culture that were important.  These were the moments that reminded me that small town America was alive and well.  The M’s and Lyme, NH held the simplicity and trust that were not often found when I wasn’t hiking.  They were just one of the many experiences that always pulled me back to these trails.  I loved the beauty and solitude, but was often surprised by how much I also appreciated the people.