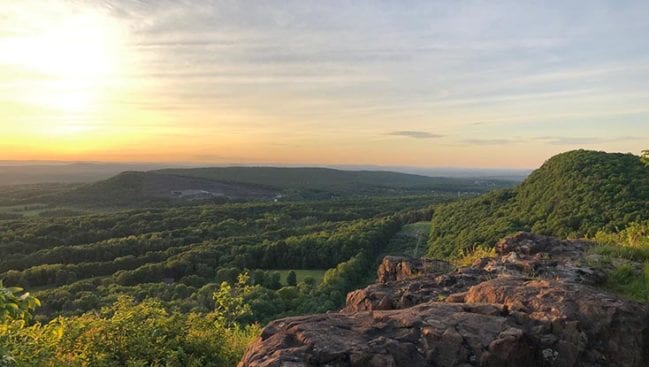 The New England Trail, or NET Mattabesett – Section 12 was a beautiful section of trail with serene ponds and park like views. The climbing was easy to moderate with climbing and meandering. The only downside was a littler more road walking than I typically like – which is ANY.

Pictures of the end of Section 12 are a little limited. By the time I had taken a hard tumble on the sidewalk (cough), and worked my way to my car in the dark, I was tired. Section 12 was the end of a 24 mile day, and just trying not to fall off rocks in the dark was my focus by the end of the hike.

I had a headlamp, but always delay in putting it on as it screws with my night vision, even if a red light.

Included on this site is an Overview of the New England Trail, and a Planning Page to help you set up your hike. Information on what I carry in my day pack is also available.

I hiked the New England Trail, Mattabesett Section 12 southbound. There might be room for two cars on Atkins Road, but I would not suggest parking there. Two people I met had both parked on Footit Drive, and taken a short connector trail. They both said the parking was good on Footit Drive. Those are the coordinates I have listed above.

Exiting the New England Trail onto Atkins Road, I took a right and headed up the road to Highland Pond Preserve. The traffic was not bad, but there was not a lot of shoulder to move off the road. It did not take long to reach Highland Pond

Highland Pond Preserve was a quiet walk around a small, serene pond. The hiking was very easy and peaceful, with a diversity of bird song. Hearing loud quacking, I looked over to see a female wood duck dragging herself through the leaves.

Hearing high pitched peeping, I saw her ducklings running in the opposite direction. I love the instincts of wildlife. She was trying to lead me away from her babes. Unfortunately, they were going my way, alongside the trail. When the “injured duck” routine did not work, she took to the air and tried dive bombing me!

I’m used to geese being this aggressive, but not wild ducks. Her second pass actually ruffled my hair, so I began running, and quickly left the duck family behind. Looking back I saw the female duck gathering the kids and herding them into the forest. What a great mom!

Leaving Highland Pond Preserve, the New England Trail turned right onto Bell Road. This quiet road led me out to busier Country Club Road. Country Club crossed over I-91, which was a memorable stretch of walking.

I was on the sidewalk crossing over I-91 when I looked down to see a coiled piece of wire lying on the sidewalk. About the same time I looked down, the wire wrapped around my feet. Managing to turn as I crashed to the concrete, I came down on my side. I had hiked 20 miles so far and not even stumbled until reaching a busy road with lots of people to watch me!

Several cars pulled to a quick stop as I wallowed around on the sidewalk. I was mortified, and must have looked intoxicated as I thrashed around. Managing to pull the wire from around my ankles, I rolled quickly to my feet, waving and yelling “I’m alright – thanks!” The guy in the pick-up truck had stopped and rolled down his passenger window – staring. I don’t think he believed me.

Waving my hand in thanks, at the three or four cars that had stopped, I ducked my red face and continued walking. Ugh.

I reached the trail head to head up Higby Mountain a little later. Finally, I could duck into the trees and nurse my road rash and lumps!

The trail head before Higby Mountain has good parking. It looks like a new parking area is in the middle of being installed. The climb up to the top of Higby is probably pretty popular.

The New England Trail wound it’s way up to top of Higby on a pretty long but moderate climb. Pay attention after the first 1/2 mile past the trail head on Country Club Road. The trail cuts off quickly to the right, and then starts it’s climb.

The long climb up to the summit of Higby is worth the effort. It is almost park like up top, with long lush grasses and beautiful views. There are some little up and downs, but nothing too major. The Mattabesett weaves it’s way along the tops of the cliffs with a lot of places to stop and enjoy the views and the hike.

The sun was beginning to set when I stopped with only 2 miles left until reaching my car. I was starving and had brought my headlamp, so I did not mind if I had to walk the last mile or so in the dark.

It was nice to stretch out on the edge of the cliff in the grass, but before long I began getting antsy. I had run out of water about an hour earlier and was pretty thirsty. A quarter of a mile further I came upon a small spring running down some rock steps – bingo!

The water was a god send! Water has been scarce over the last 3 or 4 sections I had hiked. I spend a lot of time up on the escarpment, and even the low points have not provided many creeks lately. I sat there guzzling cold, refreshing spring water for about 10 minutes before moving on over Camels Hump Mountain, which also had nice ridge views.

Back at the Car

The half mile trek down the New England Trail to the parking lot was definitely steeper than I had anticipated. There were even a couple of spots where I had to throw down my poles, crouch and jump. Those sections are never much fun in the dark, even with a headlamp.

Finally reaching the car, I settled into the driver’s seat breathing a sigh of relief. I knew I would be stiff and sore by the time I reached home, but other than embarrassing myself on the sidewalk it had been an awesome day! A few lumps were worth it!

Parking at the end of Section 12 is great. You can either park in the lot on Route 61 or down at Guida’s restaurant. There is plenty of room, and both locations seem safe. I, of course, prefer ending my hike where there is food.