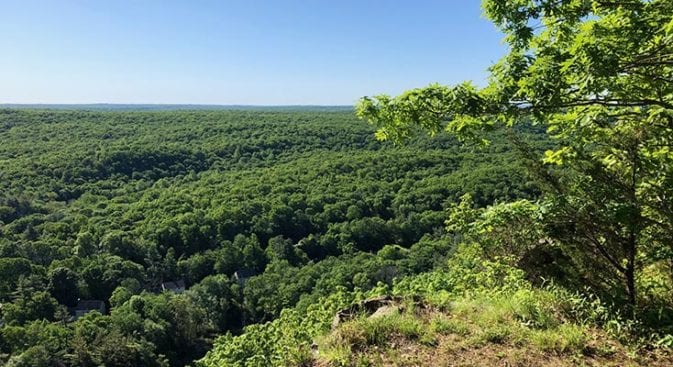 The New England Trail, or NET Mattabesett – Section 9, is an exciting section of trail with a lot to offer. I get excited about the trail that educates me about the land it traverses. The hiking challenge is a draw, but learning about where I’m hiking is pretty cool.

This section included charcoal pits, boundary stones, American flags, and great views, and I learned a new word! As climbing increased, I could feel myself moving away from the coast and thought of it in this section. It also became rockier as I moved towards the northwest.

I started Section 9 on Pisgah Road. There are a couple of places you could pull over and park here, but no excellent parking. So I parked my car further north and had a friend drop me off.

The climb started with a quick steep climb up to the summit of Mount Pisgah. The morning was foggy, so there were no good views, and the rocks were slick with morning dampness. The summit was visited often, and as houses in the valley peeked through the swirling mist, I knew the views were good.

The hike down Pisgah was steep but would probably have been less steep if I had been on the correct trail (I still don’t know where I missed the turn). I popped onto a better-maintained trail, looking to my right and left; I saw blue blazes. Oh – so THIS must be the NET. I had begun wondering what had happened to the blazes. I checked GAIA and turned left.

The trail was nice after Pisgah. I crossed a small creek and then Cream Pot Road, pausing to ponder the name. There was no signage for the road, so it must have had some significance other than a porny-sounding road name.

There was also signage for a “Vista” just after Pisgah. Instead, I found a small rock outcropping with zero views. Maybe there had been a Vista before the trees had grown up, but it’s not worth the side trip now.

Pyramid rock was a large boulder shaped somewhat like a pyramid if you squinted your eyes and cocked your head slightly. It was here that you could hike up past the rock and onto the “Red” Trail. This trail took you over Mica Ledges towards the “Yellow” Trail and the Selectman’s stones.

I did not take the side trail to Mica’s Ledges but would make a point of coming back. There was still much hiking ahead of me, and I did not need any extra miles.

Reaching the ledges after Pyramid’s Rock, I paused to look over the valleys dotted with suburban homes. The trail had switched to rocky ledge traverses, but I was still able to make good time as I paused periodically to admire the views.

Reaching Selectman’s Stones, I saw small American Flags stuck in the ground all around me. I’m not sure why the flags were placed there other than we had just celebrated Memorial Day. I tried to determine if there was some pattern to the flags, but they were pretty random.

There was also a large pile of stones. Over past years, probably hundreds of years, they have been used to mark the boundary between counties. Supposedly, Selectman used to walk the borders and inscribe dates on the stones. I would have checked for dates, but I had visions of snakes and spiders sinking their little fangs into me as I moved aside the stones. Yuck…

I began seeing more people as the NET made its way down through Rockland Preserve. Many wore masks, and several practiced social distancing, moving well off the trail.

One older man moved off into the trees. There had to have been at least 50 feet between us. I waved as I passed him. He just stood frowning at me. These are crazy times, and I feel sorry for people that are this scared, but at least he was out exercising. If there had been no Covid, it would have been a little creepy.

Rounding a curve in the trail, I saw a small footbridge with kiosks over on the other side of a small creek. Excitedly, I headed in that direction. Reading about the area I’m hiking in is so much fun! In March, I was hiking in the Santa Rita mountains and came across informational kiosks on mining in the middle of nowhere. I lost at least 2 hours exploring and reading!

I found a national historic site and wandered around the old charcoal pit area, reading about the life of a Collier. A Collier is someone that makes Charcoal. They lived in the shelter with the charcoal pits since the pits had to burn 24/7 while the Charcoal was being made. Can you say “Black Lung?” It sounded like challenging, dirty work.

Leaving the Rockland Preserve area, the NET ran along the Dave Houston interpretive trail before weaving its way over to the intersection with Menunkatuck and heading back Northwest toward Durham Road.

Durham Road has a nice parking area and is an excellent place to leave your car. If you want to hike, look at Bluff Head Cemetery, which is about 50 yards from the parking area. The first stone I saw when I arrived was from 1778. This was one of a series of cemeteries with residents from Guilford, CT.

Durham Road is where the climbing begins. After climbing up a steep hill to the ridge above, I had to take a quick breath. Thankfully the views made it a pleasant stop, with glimpses of homes, hardwoods, and Myer Huber pond below.

The forest hiking after the ledges above Durham was fast hiking, with a few rocky hillocks thrown in here and there. Reaching the junction for Lost Pine Trail, I paused to study the kiosk and trails, heading in three directions before promptly hiking in the wrong direction.

I followed the most apparent trails and ignored my maps. About 10 minutes later, I realized I had seen no Blue Blazes and returned to the trail junction. Looking at my maps again, I realized I should have taken the trail that looked to be least used.

Leaving the junction, I was looking forward to seeing the upcoming Stair Brook Falls. Unfortunately, I never saw the Falls, but I did pass over a small creek that may have had Falls following a large hurricane. Someone must have named the landmark after torrential rainfall. It’s all about timing.

There was a small reroute down to Stage Coach Road, which led out to Route 17. Route 17 is a reasonably busy road, and about a half mile down it, I passed Softail Cafe. It was closed when I passed, but it usually looks open.

The trail resumed on the other side of a guard rail beside the road. There are no markings or signage, and you won’t know the trail is there unless you look for it. Peering into the dark woods, you can make out a blue blaze.

This was the end of Section 9, and there was probably room for two cars to pull off onto the shoulder. I would not recommend parking there, though. Instead, if wanting to hike Sections 9 or 10 from this terminus, you might consider parking down the road at the Softail Cafe.

The road walking today was beautiful though, as I ambled through the back roads of New England.

Day 3 on The New England Trail was one of my favorites. The ridges above Hermit’s Cave had beautiful Fall views!