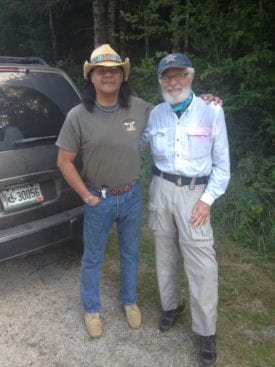 Breakfast was ginormous – even the waitress raised an eyebrow as I perused the menu and thoughtfully read each item to myself while she placed plates in front of me. I was not going to order anything else but just enjoyed reading menus like good books.   Once I had finished eating, she began to gather my empty plates, commenting on the amount of food I had eaten. I glanced up and smiled. It was only slightly more than what I would have eaten at home, and I knew she was just jealous. After 35, I could only dream of eating food like this unless I hiked hard. One of the many reasons for my wandering. I blame my appetite on my father. It is a genetic pass along, in addition to my jowls and bird legs.

I slowly strolled back up the hill to my hotel, letting my swollen belly shift and settle, moving. Everything was packed and ready to go, and Sandman was waiting for me.   As I stuck out my thumb, I asked Sandman to step away from the road.   It was less intimidating for a motorist to pick up a female hiker. They would pull over before noticing Sandman and then probably not say no.   It took about 15 minutes to get a hitch with a school teacher who was also an avid hiker. I tried to give her money since it was an 18-mile round trip, but she would have none of it, commenting on her hitches in the past. “Just pass it forward,” she said, smiling at us as we got out of the car.

The cloud cover was low, and the skies steely grey, and soon enough, it started raining consistently, with the temperatures dropping quickly. I stopped to put on my rain jacket for warmth, shed the water from the thick bushes, and put up my umbrella. Sandman shook his head at the umbrella, I’m sure very frustrated that he had not thought to bring one of his own. You don’t see many umbrellas out here. The brush is sometimes dense, and it can be irritating to have it snag and tear constantly. I did not hike without one, though. It rained more than out west, and I wouldn’t say I liked the claustrophobic feeling of a hood.

We passed Hercules and Hobbit in the early afternoon. They were a SOBO couple headed for Sabbath Day lean-to just ahead. They were interesting. They were about my age and had sold everything to hike the trail and then “WOOF” worldwide. They explained this system allowed them to offer their services for room and board. Once they finished hiking the trail, they went to WOOF around for a while, using a WOOF website to locate jobs. Hercules seemed very excited, with Hobbit maybe a tad less so, but willing to do whatever Hercules wanted.

We stopped at Sabbath Day Lean-to for lunch, and Sandman made coffee. I could tell he wanted to stay, dry out, and get out of the rain – commenting on how cold it was getting and how dry the shelter seemed. It was early, though, and I announced I was going further, so after finishing our coffee and snacks, we packed up and headed back out into a drizzle.

We only met two NOBOs that day. I have never seen two hikers more excited to see me. Their faces lit up when they saw me and said they had seen nobody else all day. I experienced the same thing climbing down Mahoosuc Arm. For many long-distance hikers, the social aspect of the AT becomes its greatest appeal. I enjoy meeting people on occasion but prefer solitude. I generally camp between shelters or sometimes near them for water. I would have to say that over the years, the main reason many hikers have told me they leave the trails is because of the solitude and loneliness.

We crossed route 17 later in the day and headed down to the river. We had been told there were good campsites, and upon arriving, met two other men also camping there. If not for Sandman, I would have hiked on and found another location, but it is tough to find late sites that will hold more than one tent, so we chatted with them briefly and then left to set up our shelters at the other end of the clearing. The two men came over to chat a little later, but I feigned sleepiness and climbed under my tarp, leaving them to chat with Sandman.

I was done for the day. I was cold and wet. All I wanted was to wrap my quilt around me and curl up for the evening.