Desolation Loop – Push for the Car!

I knew that chittering. Opening my eyes slowly, I saw small bright eyes staring back at me. The tiny red body vibrated as the chittering escalated. Red squirrels are the perfect alarm clock. They are also fearless!

“Get on you!” I said as I rolled over. “Be good and I might leave you a nut.” He snapped his fluff of a tail up against his back and sprinted for the log near my shelter.

**Note that Day One includes information for planning and logistics.

The sun had begun to rise, and pre-dawn grey was quickly being replaced by early morning light. It was a little later than I normally start, but this was my last day, and I had stopped a little earlier the day before so I could relax. I had 15 miles to hike by noon, and based on my maps the terrain did not look all that difficult on my last day on the Desolation Loop.

Pushing my quilt down around my legs, I pulled my Big Sur Bar out of my food bag. I had hung the bag last night after seeing the Bear yesterday. Better safe than sorry.

Wildlife seems a little more aggressive this year. Even yesterday’s bear had moved away a little more slowly, and there had been more curiosity than fear in it’s eyes. They sense our current species weakness, or our absence.

I rock hopped across the creek near the campsite, stopping on the other side to fill up one water bottle and gulp down the contents of the other. Cherry powder made the water easy to drink quickly. I always stay much better hydrated with flavored powder in my water. I’m not a water fan, and True Powders taste good so I drink a lot more water.

Placing my filter back in my backpack, I swung the pack onto my back, and stretching my legs I began hiking quickly. Small vampires were already attaching themselves to my limbs. I would have to stop and apply DEET soon.

Smooth, leaf covered trail was a pleasure to hike in the cool morning air. Suddenly, I felt the prick behind my knee. Slapping at my leg I threw off my pack and began digging out my small bottle of DEET. The mosquitoes were thick in the air around me. It only took a moment to apply DEET and get almost immediate relief. I really don’t like putting it on, but the bugs are brutal!

As Signal Ridge descended more steeply, the trail became wetter as I traveled along side a good size creek. Oddly enough, the creek is not on my GAIA App map. The whole area was wet though, and large stepping rocks had been moved into place along the trail in an attempt to avoid boggy spots.

I focused on rock hopping as I literally skipped down the trail. I flashed back to hopscotch as a slow grin broke out on my face and focused on not touching the ground between stones – making foot placement a game. Laughter bubbled up and time passed quickly.

Pulling up at the edge of the woods, I looked out onto the road. There was a bridge up to my left, and a parking lot across the dirt road. I looked up to the right and tilted my head slightly to the side, listening. I never come out onto a road without checking my surroundings first.

I smiled as I turned right and began striding up Livermore Road. Smooth as a pancake! At this rate I would get back to the car well before noon!

Other than the rush of Sawyer River off to my left, nature was silent as I walked up the hard packed road. Even birdsong was absent. It was quiet, and a little eerie. On a bright, shiny day like today the air should be filled with joyous trills and chirps. It made me a little sad. Over the years the songs had softened. Does anyone even notice?

Sawyer River Trail moved up the forest service road and passed the bridge to Sawyer River Pond before veering off to the right and dipping into the woods. It’s easy to miss so keep an eye out for the sign. There are also some good campsites off to the right just after you make the turn.

The trail traveled beside the Sawyer River, providing more nice hiking. I was making quick work of this last section as I approached the turn-off for Hancock Notch Trail. The trail was also becoming a little more brushy and less maintained as I moved away from the river.

Hancock Notch Trail was a longer section of trail on the Desolation Loop, but I was on the home stretch, so I slowed down a little. As I made the turn onto Hancock Notch I paused for a moment. There was a large blow down across the trail and as I looked past it I frowned. This trail did not appear to get a lot of foot traffic.

I had flash backs to Shoal Pond Trail.

I pushed through the undergrowth on the old logging road. Good thing there were no serious snakes to speak of in the Whites. If this had been the southeast, I would have thought twice before pushing my way through Rattlesnake, Copperhead, Water Moccasin and Corral Snake territory!

The trail ended abruptly at the river. Massive amounts of water had carved away the banks, and giants had played marbles with well worn boulders. In the midst of it all I stood looking for the trail. Looking up, I saw a yellow blaze, and up past a ragged maze of rock, another faded blaze. I sighed and started picking my way up over the rock. I was losing time.

The river crossings were slowing me down, and I sighed as the trail ended at an embankment in front of me that plunged to the river below. This was the largest river crossing yet and I sat down on the edge of the washed away embankment to lower myself down the wall of debris and dirt. This river crossing would be tough in high water, but water levels were low now. I surveyed the tangle of boulders and picked my route.

Boulder hopping is not something I usually do alone – the whole head conking thing, but I was starting to push a little. The terrain was slowing me down, but I hoped to break out onto better “trail” soon. That hope was dashed over the next couple of miles.

I groaned as I pulled myself up the last embankment and studied the long jumble of boulders heading uphill. Surely that was not the trail, and it either skirted around the wash or cut off to the right or left?! I knew that was probably not the case though, as I was approaching the Notch.

Pulling myself up and over the rocks, I made myself slow down. It would be silly to get hurt in the last few miles. Large, jagged rocks stretched out before me, and I slowly weaved my way through them looking for yellow blazes as I crawled over and under downed trees.

At one point I stood in the middle of what I assumed was the head waters of Sawyer River. I was perched on top of a large rock looking down into a creek that surrounded me. Where the hell was the trail? Using my favorite navigational method, I turned in a circle repeating “If I was a trail, where would I go?”

Giving up, I pulled out my map and studied it for a moment. The trail had to go up the right wall of the notch, but all I saw was a large blow down that had recently fallen. Any yellow blaze was probably buried somewhere under that mess.

There was nothing to do but to climb up and around the blow down, so up I scrambled. Looking down from the sticky, scratchy tree trunk I straddled, I saw a narrowing of dark gnarled roots. That could be the trail – maybe. I slid down under some thick branches before jumping down to a rock and beginning my slow rock weaving hike again.

Two miles took me two frustrating hours, and I was soaked in sweat. The DEET had melted away, and mosquitoes were feasting. I stopped to apply more DEET. I was going to itch for a week.

In some places there was no trail, just a line of boulders that I traveled over simply because there was nowhere else to walk. Where there was no rock, there were roots, bogs, and water.

It was tough hiking, but I took it slow and looked for the yellow blazes. Spaced far apart, each one brought a sigh of relief. This was CDT hiking in some of that trails tougher moments.

Scrambling up yet another rock outcropping, I looked up to see a pink ribbon tied around a tree. Text on the ribbon read something like “Congratulations, you have reached the end of the day!” Yes! Knowing it was probably not a foot race, I knew it was probably the end of a trail crew section!

Heading over the notch, I started down the other side and immediately passed a recently cut up blow down. Fantastic! A trail crew had been here two weeks earlier based on the date on the ribbon.

The rest of the trail down to the Cedar Brook Intersection was clear and I sailed down that mile making up lost time. Coming around the corner, I smiled at the sight of the Cedar Brook sign and sped out onto the well used portion of Hancock Notch, arriving back at the car at twelve-thirty.

Would I hike the Desolation loop again? Absolutely! Not counting the 14er’s, I saw approximately 4 people over the 3 days I was backpacking. It was a Wilderness experience, providing the connection to the lands around me that I value so much.

The Desolation Loop made me work for my miles. I admit I returned home with a few scratches and bruises, along with a multitude of skeeter bites, and even some evil ivy on my back. That is a first! The poison ivy had to be from crawling around under bushes and trees.

All that aside, it was a beautiful hike. I experienced the wildness of nature, and was provided brief glimpses into some of man’s history in these mountains. 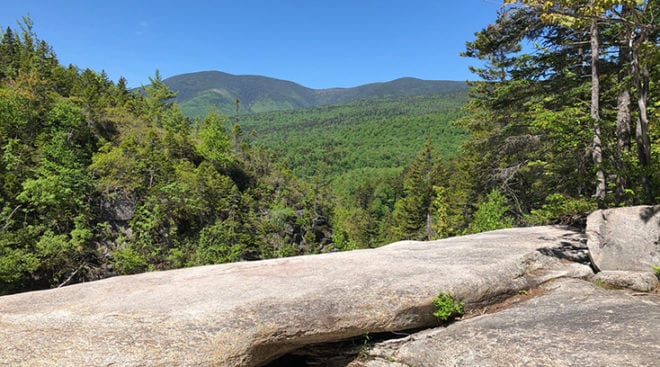 Day Two on the Desolation Loop kept me hopping! River Crossings, a black bear, and amazing beauty made this another great day in the White Mountains. 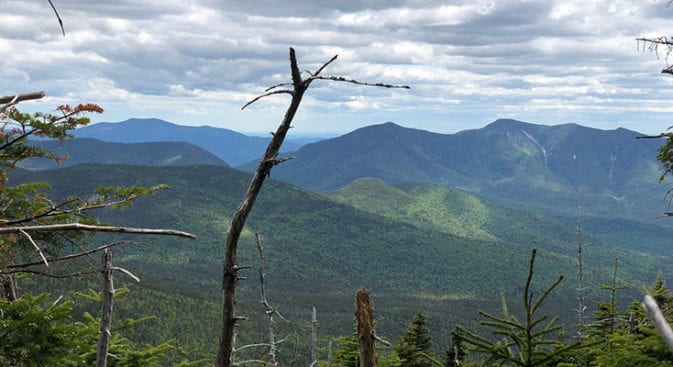 The Desolation Loop is a Challenging Hike | Average Hiker

The Desolation Loop is a challenging but rewarding hike in the White Mountains of New Hampshire along the east side of the Pemigewasset Wilderness.